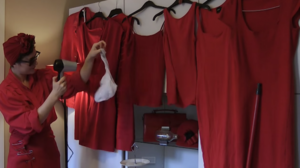 “One month after knickerbombing Taoiseach Enda Kenny, Speaking of I.M.E.L.D.A. have announced that, in their quest to creatively publicise the urgent need for reproductive justice on the island of Ireland, they next plan to visit Minister Leo Varadkar, Northern Irish Minister Jim Wells, Pope Francis and Primate of Ireland Diarmuid Martin – since all of these these prominent political and religious figures hold anti-choice positions.”

“With this #knickersforchoice campaign, Speaking of I.M.E.L.D.A. continues to subversively undermine the “po-faced statemanship” of Irish and Northern Irish politicians regarding the barbaric lack of reproductive justice in Ireland. The campaign achieves this by symbolically plucking underwear – and its close associations with the individual’s genitalia – from the private into the public sphere to highlight how governments and religious groups in the north and south of Ireland are dangerously intruding upon pregnant people’s rights to bodily and personal autonomy.”