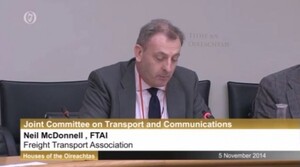 Neil McDonnell of FTA Ireland addressed the Oireachtas Joint Committee on Transport and Communications this morning to relay his concerns on Eircode, the new address system that is to be implemented in Ireland.

“Eircode is a bad postcode…Two adjacent poperties will have different randomly assigned eircodes…Eircode will impose a significant cost on SMEs in Ireland with no tangible benefit…As a national postcode however, Eircode lacks vision, imagination, ambition and most of all, practicality.”

Get on the Eircode story, jounalists. I’m told, by people who know about such things, that it’s the next Irish Water.

Man Known To Gardai Taken In For Questioning