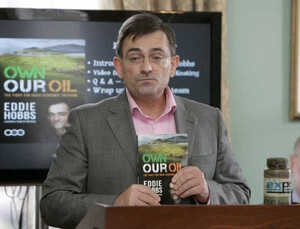 They should be ours.

Unlike many European countries, Ireland took explicit ownership of natural resources in its Constitution. While the Constitution recites its role in acting in the common good, the State reinforced its hegemony by ensuring that these principles of law, including the alienation of the people from their natural resource endowment, cannot be actionable through the courts under Article 45, which leaves the people marooned by the State when, acting as trustee, it fails in its duty of care.

Had this flaw not been engineered, today’s water protesters could be fighting through the courts and not in the streets for what the UN General Assembly in 2010 declared to be a human right: “The right to safe and clean drinking water and sanitation as a human right that is essential for the full enjoyment of life and all human rights.”

Ireland abstained from the vote on the UN declaration.

We could also be holding our Government to account for its reckless policy in handing ownership of large tracts of offshore territory to private oil and gas explorers. We are told our water will not be privatised. You can be sure that’s true. For the time being, no sane private company would want to take it on. But the State, trading at the extreme edges of debt servicing, will sell the family silver to preserve itself first and look after anything else second .

There is only one way to protect the Irish people from the incompetence, callowness, and self-preservation that is second nature to our political leaders and that is to amend the Constitution, not just for water but for all our natural resources. This means overturning Article 10, placing unfettered ownership with the people and trusteeship with the State, reducing it to acting as a fiduciary, not as the owner. The State’s behaviour in such a role could then be actionable through the courts.

Amending the Constitution at any level ought to be done carefully, consulting widely and involving constitutional lawyers to properly address requirements for balance on the question of sustainability for future generations, to allow for temporary leasing to private interests while retaining ownership, and to impose a responsibility to use the resource efficiently.

But the State will not accept diminishing its grip lightly — not without challenge. That challenge has manifestly arrived with the water protests. What is required now is a redirection of the debate towards revisiting the 1937 Constitution, recognising that the fundamental issue here is not about pricing water for the next few years but about the imbalance of power as between the people and the State on the question of Irish natural resources. That means digging under the foundations of State power. That is where we are compelled to excavate, recognising that Irish natural resources could, in a few decades, become the defining intersection in our relationship with the outside world, especially with the EU to whom we have already given up so much.

Yesterday: Well This Is Awkward