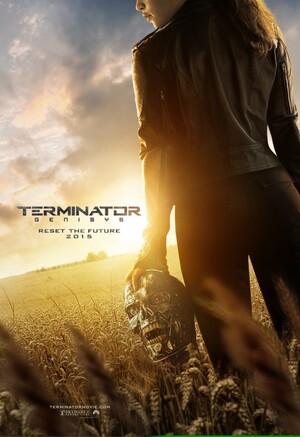 1. John Connors’ trusted lieutenant/father Kyle Reese is sent back in time to protect his mother. However, things are not really as they are meant to be as both Skynet and Connors have sent all kinds of Terminators back in time already.

2. Before you start, this is how Genisys is spelt for the sake of the film.

3. The Terminator franchise is in trouble. The Halcyon Company filed for bankruptcy protection and tried to sell the rights for $60-$70 million. The only bid was from Joss Whedon for $10,000. Eventually Pacificor, the hedge fund that pushed Halcyon into bankruptcy in the first place, made a deal for $29.5 million and set about selling off the various bits of the franchise.

4. Arnold Schwarzenegger is showing all of his 67 years. The T-800 is clearly an human-like aging model. He totally redeems himself by landing a Harley on top of a moving train and turning himself in to a stinger missile in the trailer though.

5. They got Nike to remake the ‘Vandal’ trainers that Kyle Reese wore in the 1984 original. Very important?

6. James Cameron was approached to make this film but is too busy spending his Titanic (1997) wealth on Blue Star Wars (2009). He did however have a number of meetings with producers to discuss Arnold’s role and the film’s story lines. His two Terminators were very good.

7. Terminator: Genisys is the first part of another new trilogy. Terminator Salvation (2009) was also meant to kick off it’s own trilogy but Skynet went back in time and made it rubbish.