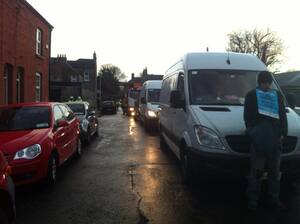 Carnew Street [in Stoneybatter, Dublin 7] blockade ongoing. Irish Water workers threatening and intimidating local residents this morning. It is an intolerable situation. Please show your support. There have been a number of arrests in neighbouring areas of Phibsboro and Grangegorman. One man arrested for filming the protest, while Irish Water’s private security filmed protestors unimpeded by Gardaí. 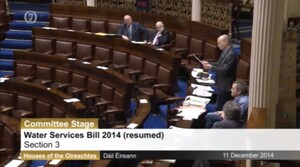 In the Dáil this afternoon Paul Murphy attempts to describes an alleged incident in Stoneybatter this morning involving private security firm Guardex.

Today in Dublin 7, Guardex, hired by #IrishWater, threatened numerous peaceful campaigners in Stoneybatter. One local resident, Mick Mooney, was on his way to work when he was pinned against a wall by three private security guards and told ‘I’ll get you. You don’t know who you’re messing with.’ They then showed him a photo of his car and its number plate. Several women in the campaign were told by private security that they’d find out where they live.
Three people were arrested in the Dublin 7 area today for protesting against the installation of water meters.
In Phibsboro, police arrested two campaigners while Irish Water contractors allegedly assaulted campaigners across the street.
In Grangegorman, a car belonging to a peaceful campaigner had its tyres slashed.
The guards arrested another local resident for filming the protest.
Today, there has been invasive surveillance of peaceful protestors by shadowy private security firms. Today, there have been violent attacks on peaceful protestors by the hired mercenaries of billionaires. Intimidation, fear, bullying and violence seem to be the only solution Irish Water can propose to local residents’ peaceful protests. If they get away with this violence in Stoneybatter, it will spread to other communities. This is not just an attack on the Dublin 7 campaign, this is an attack on us all. Join us tomorrow from 6:30 am outside Kavanagh’s pub at the top of Manor Street, and from there we will organise demonstrations around Stoneybatter, Grangegorman and Phibsboro to make a peaceful stand against this horrific behaviour. Keep Irish Water out of Dublin 7.

86 thoughts on “Meanwhile, In Stoneybatter”