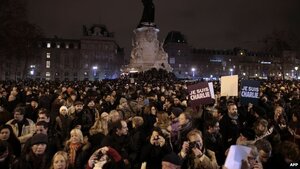 Further to the Charlie Hebdo shootings.

As an Irish person living here, now is not the time to express anything but your deepest sympathies for the families of those involved. Charlie Hebdo is an institution here. The attack yesterday was an affront on France and on the French love for a bon mot, for satire and for freedom of speech. 35,000 Parisians gathered at Place de la République last night in a defiant response to this act of terror. Over 100,000 people across France came together in similar, spontaneous shows of strength and unity. The entire nation today pays its respects. It would be indecorous in the extreme for an outsider to do anything else but bow his head in condolence.

Not that the people who worked at Charlie Hebdo would have cared much for decorum. They didn’t give a fig for it. They defied decorum and other people’s notions of it. But I wouldn’t have it in me to start a debate today. The defiance of Cabu and Charb was born of love for debate, for discussion and out of a complete disregard for polite silence. But I don’t have it in me to start that conversation right now.

Not that I can stop thinking about the students I taught at la Sorbonne Nouvelle or their own views on some of Charlie Hebdo’s more provocative cartoons. I keep hoping they’ll keep quiet on Twitter, Facebook and, above all, I hope they don’t say anything in real life. Charlie Hebdo was not always universally popular. I keep hoping that they’ll shut up about that today.

I keep thinking about the 1980s too — about all the Irish in the UK at the time of the Brighton bombing. I keep thinking about what happened in Hyde Park, in Regent’s Park and about what happened at Birmingham in 1974. My parents lived in London back then. I remember my Dad telling me how he felt ashamed to have an Irish accent after what the IRA did, especially when he would meet new people or people who didn’t know him from work. I remember he said it used to be awkward being a crowd of Irish in the pubs. When he wore a suit, there would never be a problem. It was after-hours drinking or at football matches that his accent would attract looks.

It’s not the time for it but the thought keeps niggling at me as to whether he ever apologised for the IRA bombings. That part of the story evades me. Had anyone ever asked him to come out and publically condemn the IRA for it? I can’t recall. It seems doubtful. My Dad is a proud man with a quick temper. Anyone who’d have known him in London would have known where he stood and would never have questioned it. But strangers? Would someone he didn’t know from Adam have asked him to prove his position by writing it down or saying it out loud? I don’t know if that ever happened.

I can’t imagine having the guts to broach all this at work. We normally talk everything over lunch – about racism against Roma people, about the rise of the National Front, about religion. Normally there aren’t no taboos. But the carnage yesterday. The fact it isn’t over. The rumors online. It doesn’t seem appropriate to argue today. Only a respectful silence. 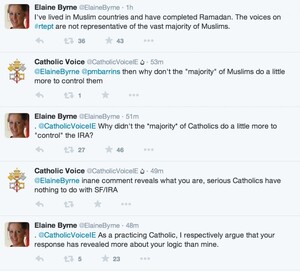 67 thoughts on “A Letter From Paris”