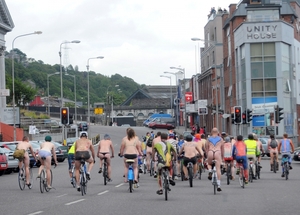 For anyone interested in freedom of speech/expression in Ireland I think it’s worth reading this gem (below) which I dug out from an old email explaining why the World Naked Bike Ride was cancelled in Dublin in 2011 (but for some reason given the go ahead in Cork).

Thu, 14 Jul 2011 Subject: Re: Dublin Bike Ride; ‘The team have failed to get Garda clearance to hold the ride as planned on Friday. The Gardai were quite firm saying that they would prevent the ride from taking place. The main reason for this is that the public may become upset because of naked/seminaked cyclists riding the public streets of Dublin. In their opinion this could lead to assaults taking place. The Gardai feel that they have to uphold law & order for all citizens even if this is a minority ( those few that may get upset as seeing naked / semi nakedcyclists ) They weren’t even willing to accept the ride going ahead if riders wore underwear. That could lead to upset as well. However the Gardai wouldn’t have a problem if the naked bike ride was held in private away from the public streets. The Dublin Naked Bike Team will be looking into the legal situation of holding the ride at sometime in the future.’

Templemore logic at its finest. Ireland: where #JeSuisCharlie doesn’t even extend to getting on a bicycle in your underpants.

35 thoughts on “Turning The Other Cheek”