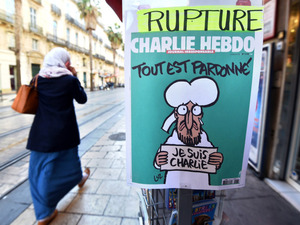 Some argue that the decision by most Irish newspapers not to reproduce the more provocative Charlie Hebdo cartoons is a betrayal of free expression….Charlie Hebdo certainly saw itself as defending free speech; but in a deliberately provocative manner. It has described itself as a “journal bête et méchant” [silly and rude newspaper]. Like Jyllands-Posten in Denmark, it countered the Muslim prohibition on images of the prophet by printing the most offensive images of Muhammad it could provide.

…Without question, nothing it did justified the slightest violence against Charlie Hebdo.
But does not publishing images of Muhammad really infringe the public’s right to information? Is this the real front line in the battle for media freedom? Surely there are more important challenges to be made than this one?

‘Right to offend’ does not require journalists to offend (Ronan Brady, Irish Times)

The rest of us generally try to show a bit of respect and decency and not do stuff that would needlessly draw on the crazies, just for the hell of it. And that sort of automatic self-censorship is what makes us civilized as human beings. It’s not just a matter of judgment; it’s a matter of common sense. Talking about some concept of ‘absolute and unfettered free speech’ is not only factually untrue, it also assumes the imposition of a whole range of cultural values on another people who happen to share the globe but who think differently.

Amidst the right and proper condemnation of the killings in Paris, surely it is possible that we can ask some questions, and give some context. Or is there also to be a censorship of any debate around this event, which would be a grim irony in itself. Surely, such a debate is worth having, and having urgently, given that Charlie Hebdo now plans to publish further such images and other publications have vowed to do the same, thereby surely creating further unrest – and possible killings.

“The Alliance Francaise cultural centre in Dublin said, based on their inquiries, there is no where in the State to purchase a copy of the magazine. A spokesman there said some members of staff were asking relatives in France to buy them a copy. He added that the centre would be taking out a subscription with the magazine so members will be able to read it in the library there, but they won’t be allowed take it home.”

38 thoughts on “Prophet And Loss”