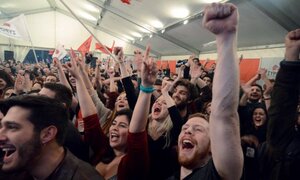 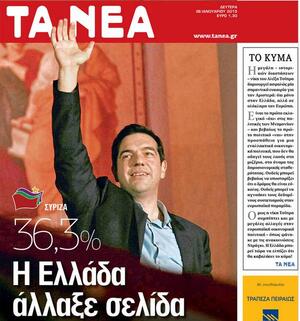 Alexis Tsipras of Syrzia on the cover of  Greece’s’ Ta Nea newspaper (above) this morning and Syrzia supporters (top) in Athens in the early hours.

In a functional market economy, the classic couple in a posh restaurant are young and close in age. In my travels through the eurocrisis – from Dublin to Athens – I have noticed that the classic couple in a dysfunctional economy is a grey-haired man with a twentysomething woman. It becomes a story of old men with oligarchic power flaunting their wealth and influence without opprobrium.

The youth are usurped when oligarchy, corruption and elite politics stifle meritocracy. The sudden emergence of small centrist parties led by charismatic young professionals in Greece is testimony that this generation has had enough. But by the time they got their act together, Tsipras was already there.

From outside, Greece looks like a giant negative: but what lies beneath the rise of the radical left is the emergence of positive new values – among a layer of young people much wider than Syriza’s natural support base. These are the classic values of the networked generation: self-reliance, creativity, the willingness to treat life as a social experiment, a global outlook.

Greece shows what can happen when the young revolt against corrupt elites (Paul Mason, Guardian)

38 thoughts on “Greece Is The Word, Is The Place, Is The Motion”