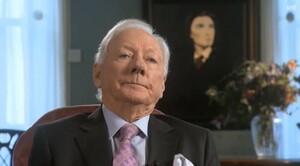 Gay Byrne: “Suppose what Oscar believed in when he died, despite your protestations, it’s all true and you walk up to the Pearly Gates and you are confronted by God, what will Stephen Fry say to him, her or it?”

Stephen Fry: “I will basically, that is the theodicy I think, I will say ‘Bone cancer in children? What’s that about? How dare you, how dare you create a world in which there is such misery it’s not our fault? It’s not right, it’s utterly utterly evil, why should I respect a capricious, mean-minded, stupid god who creates a world which is so full of injustice and pain?’ That’s what I’d say.”

Byrne: “You think you’re going to get in?”

Fry: “No, but I wouldn’t want to. I wouldn’t want to get in on his terms. They’re wrong. Now if I died and it was Pluto, Hades and it were the twelve Greek Gods then I would have more truck with it because the Greeks were, they didn’t pretend not to be human in their appetites and in their capriciousness and in their unreasonableness.
They didn’t present themselves as being all seeing all-wise all-kind all beneficent, because the god who created this universe, if there is a god was quite clearly a maniac, an utter maniac, totally selfish, totally, we have to spend our life on our knees thanking him, what kind of god would do that?.
Yes the world is very splendid but it also has in it insects whose whole life cycle is to burrow into the eyes of children and make them blind, they eat outwards from the eyes, why, why did you do that to us?
You could easily have made a creation in which that didn’t exist, it is simply not acceptable, so you know atheism is not just about not believing there is a god, but on the assumption that there is one what kind of god is it, it’s perfectly apparent he is monstrous, utterly monstrous, he deserves no respect whatsoever, the moment we banish him life becomes simple purer, cleaner, and more worth living in my view.”

Byrne: “That sure is the longest answer to that question that I ever got in this entire series.”

The Meaning of Life with Gay Byrne, Sunday February 1, 10.30pm

Stephen Fry's response to being asked what he'd say to God if he met him is totally BRILLIANT http://t.co/dk5hxmLD8a pic.twitter.com/rMqIeIeyfN

What Year Is This?