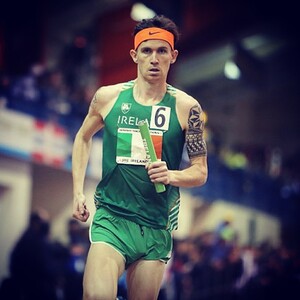 The Irish Distance Medley Relay team – Declan Murray and Brian Gregan, from Clonliffe Harriers AC in Dublin; Mark English, from UCD; and US-based Ciarán Ó Lionáird, from Leevale AC in Cork – ran at the Armory in New York and finished second behind the US team.

The Irish team also finished under the previous world record with a time of 9.25.37.

The four men will compete in the 2015 Morton Games in Dublin on July 24.

“Last night, Ireland, a country of less than 5 million people put four guys on the line to try for a world record in the Distance Medley Relay against middle distance powerhouses USA and Kenya, as well as a bunch of other talented teams.

We ran under the old world record but came up short to a very talented US team. That said, I’m very proud to be a part of a nation with a rich tradition in middle distance and we are back mixing it on the world stage again. It’s an exciting time to be an Irish athlete.”