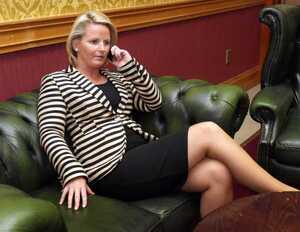 Lorraine Higgins: “Everybody will receive a bill, notwithstanding whether they’ register or not, in April. And I do believe…”

Gavin Jennings: “Sorry, I’m confused. What allowances will you not get if you don’t register by today.”

Higgins: “Well there are certain allowances for children that have to be taken into account and if you don’t register by today, by midnight tonight…”

Higgins: “Well there are certain allowances Gavin, right across the board, for children, in terms of capacity, the number of litres that you get on an annual basis and I would urge your listeners…”

Jennings: “I thought you were being billed irrespective of how much you use, isn’t that right? I thought it was dependent how many people were in the house.”

Higgins: “That’s correct. It’s costing €3 per week and it’s very important to ensure the quality of our water in the future and I know from dealing with people in clinics, Gavin, that you know they don’t have the same degree of difficulty as they had prior to this new range of measures that was brought in by the Government..”

Jennings: “Sorry, just to be clear, sorry, today’s deadline, again. If people don’t register, and plenty haven’t, what don’t they get if don’t register by today?”

Higgins: “Well, you know the department of the environment has come out very clearly and said that there may be a situation where there’d be added cost on to the price of paying for water for this year.”

Higgins: “That hasn’t been clarified yet and I await to find out what that will be. There will probably be a lot of discussion over the course of the coming week in relation to it.”

Jennings: “So, just to be clear, if you don’t register by today, what happens?”

Higgins: “If you don’t register by today, there will be, there will be a situation where you’ll be given optimal time to actually register, right up…”

Jennings: “So you’ll be given more time, yes?”

Higgins: “It seems to but to be clear, the minister has always stated from the outset and indeed even last week, that the second of February [today] was not a dropdead deadline.”

Jennings: “So, if I’m not sure if I want to register to pay for Irish Water, you’re going to give me more, I’m going to be given more time, I don’t have to do it today, is that right?”

Jennings: “But I don’t have to do it today. I’m not really going to face any problems if I don’t do it today, is that right?”

Higgins: “Well the situation is, and as I said, a release from the department with regard to possible penalties and that needs to be borne in mind.”

Higgins: “There’s no clarity on that, right at this moment, Gavin.”

Higgins: “But I wouldn’t be advocating that people break the law like Mary Lou (McDonald, Sinn Féin TD who earlier declared her intention to not pay) seems to be doing. I think it’s interesting, her position, given…:

Jennings: “She’s talking about not paying, we were talking there about not registering. If I don’t pay and I know this is a hypothetical matter because the bills won’t arrive until April. If I don’t pay, what will happen to me?”

Higgins: “Well there’s a situation where there’ll be an exchange of information from the Revenue. We expect that there’ll be legislation brought in over the course of this month where it’ll be possible to put a charge on property. It’ll also be possible for landlords to bill their tenants and take it out of their deposits.”

Jennings: “Not yet though, no?”

Higgins: “Well this is something that’s going to be looked out over the course of this month and we hope to have legislation in place before the end of February.”

Jennings: “So, at the moment, if I decide I’m not going to pay, you don’t know what’s going to happen to me yet, is that right?”

Higgins: “Well that’s the position right now but as soon as the legislation is prepared and brought before the Houses of the Oireachtas, it will be expected that there will be a charge put on people’s properties and landlords will be permitted to take the cost of water out of a tenant’s deposit.”

Jennings: “How much of a charge do you think should be put on people’s property if they don’t pay?”

Higgins: “I can’t say that, Gavin and I’m not going to speculate on that.”

Jennings: “But you’re one of the…you’re a member of a party who’ll be legislating for it, what’s your opinion?”

Higgins: “Well I haven’t given it significant thought but I would urge people that’s important not to break the law, I wouldn’t be throwing it around, the populist line that Sinn Féin currently are, you can see how Mary Lou stuttered and stammered over the issue about how she was going to pay for water and how the Government would pay for water in terms of taxation.”

Jennings: “You can’t tell me what would happen if I don’t pay for water.”

Higgins: “Well these are decisions that’ll be made by the Government, Gavin.”

Jennings: “But they haven’t been made yet. There’s a deadline in place for today to register. The bills are going to arrive in April and we still don’t know what’s going to happen if people don’t pay.”

Higgins: “Well I’ve made it very, very clear that there will be a charge put on property and landlords will be permitted to take the price of Irish Water out of deposits.”

Jennings: “Senator Higgins, a large number of people haven’t registered today, thousands of people have protested on the streets and are continuing to do so, there’s no grant in place yet, the amount of income that Irish Water is going to get as a result of people paying bills has already been lowered. There’s no guarantee of passing the Eurostat test, no clarity on what landlords are expected to do, if their tenants don’t pay. What part of this plan has been a success so far?”

Higgins: “First and foremost, I don’t share your view Gavin when it comes to the numbers that have registered. There’s almost 1.1million that have responded – that’s 60% of where it needs to be. And there’s quite a large number…”

Higgins: “But look I mean, as I said, the second of February, isn’t a dropdead deadline, you know..”

Higgins: “Mistakes were made last year, there’s no question of that, we’ve held our hands up to that but all you’ve to do is look at the protests over the weekend, you know, the numbers were significantly down.”

Jennings: “What part of the policy, so far, has been a success?”

Higgins: “Look we’ve had difficulties, any time you’re trying to set up a new utility, it’s going to present some degree of difficulty. And I think you will acknowledge that.”

Jennings: “But has there been any success yet?”

Higgins: “Of course there’s been success. You can see the silent majority that have paid, or have registered rather, to pay the water charge, at 1.1million as it stands.”