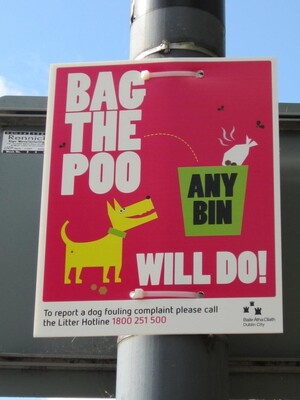 Is there anything we can do about the everyday and real menace of dog poo?

Only 13 fines were issued across the whole of Dublin for dog fouling offences last year.

Jonathan Healy: “Now, only 13 fines were issued across the whole of Dublin for dog-fouling offences last year -despite the fact that in 2013, there was a joint dog-fouling campaign that saw ten grand being spent by local authorities to tackle the issue – only a handful of fines have been issued by the courts. Bernie Lillis is a Litter Prevention Officer with Dublin City Council, obviously dog poo falls within litter prevention, if you’re talking to me? Good afternoon, Bernie.

Bernie Lillis: “Good afternoon, how are you? Yes, it is an offence. under Section 22 of the Litter Pollution Act.”

Healy: “Okay, so, why have so few people felt the heat of the law on this one -let me put it this way?”

Lillis: “Well, to be very honest with you, it’s a very,very difficult piece of legislature to enforce. Because, what the law says is that the person in charge must remove the faeces, and dispose of it in a sanitary manner.”

Healy: “The person in charge of the dog, I presume?”

Bernie: “Yes, yes, so it’s very, very difficult then for someone – say like a Litter Warden, or a Dog Warden to come along and say, ‘Right so, I noticed that you didn’t clean up after your dog, I’m now going to issue you with a fine, please tell me your name and address’. Obviously, the person is not going to give a name and an address. So what we’re doing now is – we’re moving towards, you know, a situation where we’re going to try to encourage people and influence them, and make them aware that it’s just not acceptable behaviour.”

Healy: “Are you saying now, Bernie, that this is legislation in place that is unenforceable.

Lillis: “Yes, it’s very, very difficult to enforce – and people know that, and obviously, after this interview here, and the fact that I’m speaking about it. But, you know the good thing is about it is, after some research that we’d done in 2013, some 63% of people, always pick up after their dog – 136 dog owners interviewed. They said 63% pick up after their dog. That’s good, you know.”

Healy: “The whole point was that there was a ten grand advertising campaign that they would enforce the law, if they didn’t clean up after their dog – and now we have the person in charge of it saying, ‘Look, the law is there, but we can’t do anything about it.’ Do you need more help with this, do you need more funds, or are you just going to try and rely on public opinion to turn around and educate dog owners from leaving their stuff behind?”

Lillis: “In a perfect world – obviously we would have more Litter Wardens and more Dog Wardens out there patrolling every plain square that a person walks their dog – 24/7.”