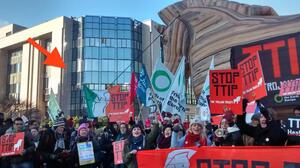 A Trojan horse and defiant tricolour among protestors outside the European Council  as the next round of negotiations on the controversial Transatlantic Trade and Investment Partnership (TTIP) trade deal begin..