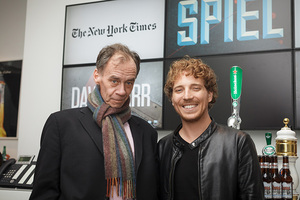 I am sorry to have to tell you that our wonderful, esteemed colleague David Carr died suddenly tonight after collapsing in the newsroom. A group of us were with his wife, Jill, and one of his daughters, at the hospital. His daughter Erin said he was special, and that he was.

He was the finest media reporter of his generation, a remarkable and funny man who was one of the leaders of our newsroom. He was our biggest champion, and his unending passion for journalism and for truth will be missed by his family at The Times, by his readers around the world, and by people who love journalism.

An email sent by Dean Baquet, editor at the New York Times, informing staff of the death of David Carr.

Previously: Turning Down Isis And Taking On The Man

3 thoughts on “Meanwhile, In New York”