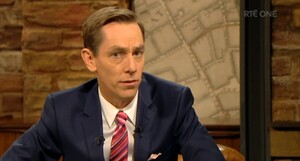 Last Friday Paul Murphy TD of the Anti-Austerity Alliance was on RTÉ’s The Late Late Show where Ryan Tubridy questioned him about the water charges protests that have sprung up throughout Ireland recently.

Many on social media have noted how Tubridy was biased against Murphy, showing that he disapproved of the protests, or at least the ones that involve civil disobedience.

Another way to see it is that Tubridy was pretty good from the standpoint of protecting government interests. He’s paid handsomely for that. His current salary is €495,000, and in 2011 it was €723,000. He asked all the right questions to try to discredit the water charges protests and Paul Murphy by:

– Bringing up the protests that left Joan Burton in her car for two hours during which she was apparently ‘intimidated’ and asking multiple times whether this was ‘appropriate’ and saying the protest should have been more ‘civilised’.

– Asking whether Paul Murphy gets a ‘thrill’ from being arrested because this allows him to get in the media.

-Bringing up the protest against President Michael D. Higgins and suggesting it was wrong because the President shouldn’t be challenged.

– Asking why would anyone protest the water meters closer than 20 meters if the courts said they should stay beyond 20 meters.

– Trying to picture Paul Murphy as being ‘anti-everything’ but not proposing any positive alternative.

Those are standard tactics of a media establishment that fears real democracy. Real democracy involves more than voting for two or three similar parties once every few years. It is about people being able to make decisions that affect their own lives and participate in policy at the national and local level.

The problem with that from the establishment’s viewpoint is that the policies that would be favoured by the majority of people would often turn out to be completely different from those that have been imposed on us over the last few years of austerity.

For example, who, other than the government, would want to implement policies that have forced 31% of the population into deprivation, up from only 12% in 2007?

The media used rather flimsy arguments to try to cast a negative light on those who protest. We’re still talking about Joan Burton’s feelings while in her car, but less so about those who have suffered from the cuts.

The strongest reason gathered to oppose protesting the President is that… well, he’s the President, after all. If you oppose cutting government services, you must be doing so for personal glorification, not because you care about people. Or maybe you just reject everything like an immature child.

The sole mention of civil disobedience brings hysterical reactions, even though it’s been used around the world to resist immoral policies. Howard Zinn, the celebrated American historian, put it this way during the Vietnam War (Hollywood’s Matt Damon read those lines in a video here):

‘Civil disobedience is not our problem. Our problem is civil obedience. Our problem is the numbers of people all over the world who have obeyed the dictates of the leaders of their government and have gone to war, and millions have been killed because of this obedience. Our problem is that people are obedient all over the world, in the face of poverty and starvation and stupidity, and war and cruelty.
Our problem is that people are obedient while the jails are full of petty thieves, and all the while the grand thieves are running the country. That’s our problem. We are going to need to go outside the law, to stop obeying the laws that demand killing or that allocate wealth the way it has been done, or that put people in jail for petty technical offenses and keep other people out of jail for enormous crimes. My hope is that this kind of spirit will take place not just in this country but in other countries because they all need it.
People in all countries need the spirit of disobedience to the state, which is not a metaphysical thing but a thing of force and wealth. And we need that kind of declaration of interdependence among people in all countries of the world who are striving for the same thing.’

Those thoughts should enter the media debate in Ireland.

@JulienMercille is lecturer at UCD and the author of The Political Economy and Media Coverage of the European Economic Crisis: The Case of Ireland. He will provide evidence to the Banking Inquiry {in March] on the role of the media during the housing bubble years.