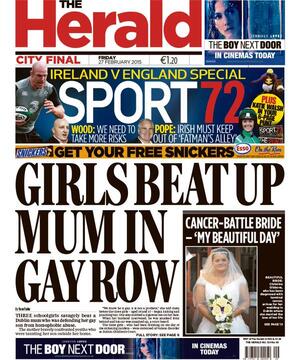 In evidence, Judge O’Connor heard that the couple’s son had gone out of their home to walk a younger sibling back from a bus stop.Someone had been throwing stones at their house and there was a group of teenage boys outside.
The woman said “I could see they were very angry” and her son was repeatedly taunted about being gay.
She said she went out and calmly told the teens: “We know he is gay, it is not a problem.”
“Three girls came running at me, screaming and shouting who the eff did I think I was,” the woman told the court.
She was on the verge of tears as one of the girls had a cigarette and “went for my eye but it hit just under my eye”.

Mum kicked and burned by girls after defending her son from gay abuse (Tom Tuite, Herald.ie)

Do You Own A Restaurant?