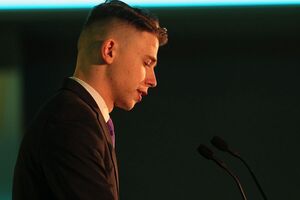 Dale McDermott gave his end of term address as President of Young Fine Gael at the YFG conference in The Radisson Blu Hotel, Ennis Road, Limerick at the weekend.

He closed his speech with a deeply personal plea.

The immediate challenge however for the next National Executive of Young Fine Gael is the Marriage Equality referendum. Young Fine Gael needs to play a significant role in this campaign.

Accepting my sexuality and being honest about me to family and friends was an agonisingly difficult and damaging journey. “Coming out” as it’s termed was the hardest thing I have had to do in my entire life.

For years, being gay consumed my mind – I hated it. I was depressed; I felt that I could never achieve my potential and that a limit would be placed on how far I could go. I thought I would face ridicule by those close to me, that I would be shunned by society and that the door to happiness would close for eternity.

I realised after years of mental agony that hiding who I really was would mean I would never be happy. I nervously took a leap of faith and told my family and close friends that I was a gay man. Since then I haven’t looked back.

I can say with absolute honesty that “coming out” has made me into the person I am now – happy, confident and even more determined to achieve whatever I aspire.

At the same time however, I know what it is like to be the teenager in the classroom, hiding under a thin veneer of “straightness” because of an institutionalised fear of what my peers would say and do if my veneer was scratched.

I know what it’s like to feel that the only way I can fix my problem is by pretending it simply doesn’t exist or even during my darkest days, by ending it all entirely. No one should have to go through that mental roller coaster especially during his or her teenage years. Sadly, for some, this is what being gay is like in our modern day republic.

Equality and freedom is the basis of any republic. While gay Irishmen and Irishwomen enjoy freedom, they are not equal.

The thought process would of course be negative and in my personal circumstance it added to my mental woes.

In May, Ireland will be given the opportunity to right what has been a wrong inflicted on the LGBT community in our country. Not only will a Yes vote bring forth a new dawn on the night that exists for many gay people throughout this country, it will also tell the teenager in the classroom who is struggling with their sexuality, like me only a few years ago, that it is okay to be who you are in modern day Ireland, that it is okay to feel strongly for someone, no matter their gender.

I don’t want to have to leave my country that I have grown up in for twenty-two years but I feel that if Ireland decides to keep the status quo and deny marriage equality, I will have to.

This is a great country. On May 22nd, Ireland will vote on Marriage Equality. On that same day, I will finish the final examination of my college degree. I hope that on May 23rd, I wake up an equal citizen in my country.

A country that welcomes and embraces diversity. One that grants equal rights to each and every one of its citizens, including the right to marry. The alternative is that I enter an Ireland that simply does not believe its gay citizens deserve the same rights as everyone else. A country disguised as an Orwellian Animal Farm that would proclaim I am equal; just some citizens are more equal than others.

I will therefore have to decide if that is a country that I want to live in and the answer at the moment is sadly no. I want the rest of my life to be exciting, fun, challenging but most of all; I want to share my life with someone who I love.

If Ireland rejects the referendum on marriage equality, I will be forced to leave my family and friends because my country will refuse me the right to share my life with the person I love.

Our forefathers believed in equality. From the very roots of ours nation’s beginnings, equality, liberty and fraternity were etched in their minds when dreaming of the much yearned for republic. The words of our proclamation:

“The Republic guarantees religious and civil liberty, equal rights and equal opportunities to all its citizens, and declares its resolve to pursue the happiness and prosperity of the whole nation and all of its parts, cherishing all of the children of the nation equally and oblivious of the differences carefully fostered by an alien government, which have divided a minority from the majority in the past”.

‘It’s Not A Generalisation’