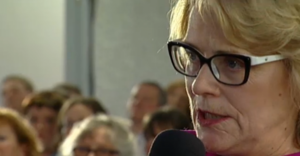 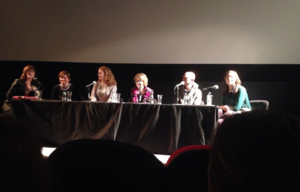 From top: Helen Rochford Brennan asking a question during The People’s Debate with Vincent Browne on TV3 last night; and a panel in the IFI last weekend, after a screening of Still Alice, including Helen, third from right

You may have seen The People’s Debate with Vincent Browne last night.

Helen Rochford Brennan, from Sligo, who was diagnosed with Early Onset Alzheimer’s in her 50s, addressed the panel with this question:

“I have  Early Onset Alzheimer’s. I’m chair of the Irish Dementia Working Group and, unfortunately Vincent, I have to read my question because I’ve been robbed of the ability to ask a question.

There are 48,000 of us living in this country, 4,000 of us under the age of 65 and there is no cure and there are no services for people under 65. Globally, dementia is recognised as a major health priority, as outlined in the World Health Organisation and the G8 health ministers. I would like to ask the panel what they plan to do, at national level, to address dementia?”

The panel discussion, organised by the Alzheimer Society of Ireland (ASI), was chaired by director and producer Anna Rodgers, and featured Tina Leonard, Head of Advocacy at the ASI; Hilary Moss, Director of the National Centre for Arts and Health; Helen, who is chair of the Irish Dementia Working Group and vice-chairperson of the European Working Group of People with Dementia; Ronan Smith, who was was diagnosed with Early Onset Alzheimer’s at 56 and who is an advocate for the Irish Dementia Working Group; and Bairbre Ann Harkin, Education Curator at Butler Gallery Kilkenny.

“I suppose Alice was my own journey. With the condition, I very much identified with the examples; of forgetting words, stopping mid-sentence, wondering what I was about to say, covering up, forgetting appointments, you know, maybe taking three days to write something or now maybe taking three weeks. Words, like Alice, in front of me and you cannot reach them. Look I had a wonderful life, it was full of love and now sadness, I suppose over life’s journey coming to an abrupt halt.

But the movie depicts the devastating illness which many people do not understand and our eventual demise and how it affects those we love. But it also shows something that we are fighting hard for here in Ireland and that is how dignified and how graceful the in for Alice was in her own home. There’s very little funding in Ireland, I’m afraid, for packages, for us to stay in our own homes. I believe the research, it really was outstanding. And when she [actress Julianne Moore] went and visited people, she really mirrored my life and many people like me.”

“I felt sometimes I was watching myself. And I hope you saw the positive message in it and Tina [Leonard, of The Alzheimer Society of Ireland] mentioned it, about how Alice was getting on with her own life and she spoke at an Alzheimer’s conference and she was doing all this while Alzheimer’s was attacking all she had worked for.

Like Alice, I had a wonderful career and an active life and then I had the grieving of coming to terms with the fact that life will never be as it was. I wonder if many of ye noticed the clock [a bedside clock that appears in several scenes in Still Alice, when Alice gets up in the middle of the night]. I suppose the clock, for me, is the hardest… and that’s because we all have those feelings. And sometimes I sneak out and try and keep Sean [Helen’s husband] from waking him up and I go down the stairs and think about what maybe the future might be.

Because there is no cure. And her husband was wonderful, like my own and she didn’t want, in the end, to derail his career I suppose. So, in my opinion, the film is hugely important for Alzheimer’s advocacy. As, it is such an accurate portrayal of what the condition is and Alice did her advocacy and our role as advocates is to help to bring dementia out of the shadows and get people to talk about it – particularly early onset Alzheimer’s which affects, as Tina said, 4,000 people.”

“Yes of course it wasn’t easy to watch but [Still Alice] explores many important aspects of dementia and, in particular, the burden us women have. Both in terms of much higher prevalence rates and in terms of bearing the burden of carers. We are twice as likely to get dementia as breast cancer… I’ve always been a community activist, no matter where I lived, and human rights have been very much to the fore, for me. I’ve been an advocate for as long as I can remember and now I find myself fighting for my own rights and for the rights of everybody with this horrendous illness. You know I realise there was really something wrong, you know, with my memory being impaired and my intellectual abilities weren’t functioning the way they should be. I had slow thinking, it gave me huge problems. You know, sometimes, I was at meetings and I just couldn’t remember the words, words that I had just newly learned, something I had read in the paper, and Sean and myself talk a lot about what’s in the news, and I’ll learn it today but I’m afraid that 90% of it is gone tomorrow – as today will be…

“There’s nowhere for us to turn under 65. In Ireland, there just aren’t services for people who are under 65 and, especially if you want to get on with your life, and if you’re working. Unfortunately, because I didn’t know how to handle this I had given up my job. I threw in the towel before really maybe it was necessary to do so… Believe me, this illness tests friendships. Some will stick with you, I’m afraid most leave you and they leave you with a feeling of isolation…”

“We need to have our basic human rights met. All we’re asking, is that our human rights are met. You know that I’m under 65, or over 65 shouldn’t really matter what should matter is that my illness is taken care of and that is not happening. So we want to see that change. And we want the state to honour the fact that if we want to live and die with dignity, like you saw Alice, the end of her life, it was so dignified and beautiful, that she was able to stay in her own home. We want to see that there are home care packages for our carers and that we don’t have.

So I will continue to advocate for dementia awareness, just like Alice. Not everyone can become an advocate because it drains the life right out of you. But we put our emotions on the sideline and we tell our story but the rewards are huge. Not for us, but for all people suffering with dementia. As advocates we’re creating a better quality of life that, some day, we will all benefit from.”

Meanwhile, after the panel discussion ended, Dr Suzanne Cahill, director of the Dementia Services Centre at St James’s Hospital, who was sitting in the audience, asked to address the panel.

“Clearly, yes, there is a need for awareness and there’s a need for really de-stigmatising dementia but, in my view, I’m really very disenchanted with the Government’s whole approach to dementia. We were commissioned to undertake the research review for the Dementia Strategy and it was three years before a strategy came out, by which time our statistics were out of date. The strategy was launched before Christmas. We’re now three months into, we’re through the first quarter of this year, there’s no visible signs of any new services in my view. I listened to [Health Minister] Leo Varadkar last week, in Trinity College, provide his outline of services for this coming year – no mention of dementia at all in his service plan for 2015.

“And, as recently as Friday, a circular was sent to me, an excel sheet to complete, regarding our commitment to dementia for the coming years. There’s going to be a big dementia forum in Geneva, held by the World Health Organisation, and led out by the UK on the 16th and 17th of March. And when I replied to the Department of Health and asked which of our ministers will be attending this conference, I was told there’s no minister available. So that’s how bad it is and I really, really appeal to people like Helen and to Ronan to keep the pressure on. There are people desperate out there for help and for services and it’s so wrong and so immoral.”

Listen to a podcast of the full panel discussion here

The Alzheimer Society of Ireland