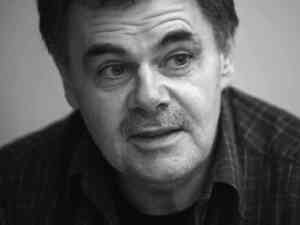 Because David Manning, of media monitoring website MediaBite, has carried out a lengthy interview with Gene Kerrigan.

Gene Kerrigan: “Generally the media – not always or directly – reflects society. We live in a fairly conservative society where people see politics through a narrow lens. You vote every four years, elect a government which then looks after the running of the country. When something happens, such as the water tax protests, media people are interested, but it’s not something they’re comfortable with. Then someone throws a brick, it confirms media people in their discomfort. They’re more comfortable posing the story as real politics versus throwing bricks. I think that mindset applies to everyone, citizens and journalists alike. I wish it wasn’t that way – I’d rather a broader interpretation of debate and political interaction but I think it is a very conservative country.”

David Manning: In terms of that idea of reflecting a conservative society, it seems like a contradiction in the sense that there is this movement that has grown organically, it didn’t come from the universities, it didn’t come from the established political parties, it came from ordinary people who can’t afford to pay. On the other hand the press appears to be representing another public, a more conservative public. What public do you think the press represents?

Kerrigan: There’s something I find amusing – the total absence of the right wing in Irish politics. For instance, Clare Daly would be described as a left wing TD, and she would have no problem with that. But the media never describes Willie O’Dea as a right wing TD, or Leo Varadkar, Brendan Howlin or Eamon Gilmore. Gilmore was Tanaiste in a government that implemented very right wing, Merkel-style politics. And yet he would be portrayed as left of centre by most media, simply because of the Labour label. Similarly, in journalism. People would describe myself and some others as left wing, and we’d have no problem with that. But no one ever describes the political correspondents as right wing journalists – even though they clearly report, approvingly, almost entirely within the consensus of the right wing parties. So there’s an invisible right wing, that is so much part of life that we don’t even have a name for it, it’s just seen as the norm. Anything on the left is identified as being somehow from ‘the other’. It’s from the outside. I don’t think the media even recognises that what is seen as the centre is way over to the right.”

Read the interview in full here

29 thoughts on “The Invisible Right Wing”