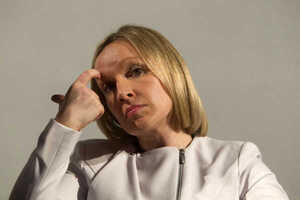 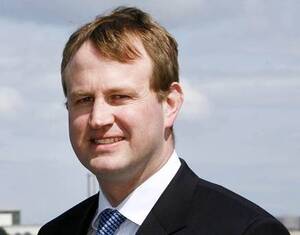 Wince at the rugby analogy.

Lucinda Creighton: “We’ve been very clear about this, both in relation to our proposals in relation to cabinet minutes and in any utterances in respect of the Attorney-General’s advice, that anything, that threatens national security whether it’s defence related security or whether it’s in relation to criminal justice or whether it’s in relation to the economic security of the State, of course in those circumstances the A-G’s advice cannot be published.
But, for example, there are countless examples where governments have hidden behind the Attorney General’s advice. One example that I cited in my article in the Irish Times is the example of upward-only rent reviews. Now, when the now Taoiseach, then Leader of the Opposition Enda Kenny cited legal opinion and legal advice from eminent constitution lawyers suggesting that the abolition of upwards-only rent review clauses could be achieved and would be achieved in Government. Now, no sooner was he in Government than he started hiding behind the Attorney-General’s advice, and this isn’t unprecedented, if you look around the world at other similar jurisdictions, for example the United States, you can actually go on to justis.gov, the website of the Attorney General in the United States, you can read legal opinion by the Attorney -General and the…”

Sean O’Rourke: “So why not here, Jim O’Callaghan?”

Creighton: “Jim is citing a very very narrow number of cases the reality is that Attorney-General’s advices are constantly being used and we all know that lawyers differ and you can, you know, on the upward only rent review subject, for example, Gerard Hogan who is arguably the leading constitutional lawyer in the State gave absolute contradictory advice to that of the A-G. Now I cannot understand why Jim, and it would appear Fianna Fail, are so fearful of debate and teasing out these issues.”

O’Rourke: “Now on that point Jim O’Callaghan, what would have been wrong with the Government acceding to Micheal Martin’s request latterly in relation to the proposed legislation on fatal foetal abnormalities?”

O’Callaghan: “The principle is the same in every example that Lucinda has put forward. The downside is that if the other side in litigation gets access to your legal advice they go before a High Court judge and say, listen, we know in fact what the Attorney-General is advising.”

O’Rourke: “So is Micheal Martin wrong in that instance?”

Creighton: “Well at least the public are perfectly well aware now that whatever Micheal Martin may say in Opposition he has absolutely no intention of publishing any A-G’s advice in government.”

O’Rourke: “You’re potentially his A-G as you are the legal adviser to the FF Front Bench.”

O’Callaghan: “There are circumstances, there are very there are very limited circumstances where the advice of the A-G should be published. For instance if a case had been settled by the State and if large amount of money had been paid by the State to the other side in litigation and there was public outcry about it then in those circumstances the A-G and the Government could make the decision to publish that advice, the reason why it would be acceptable in that situation is that there are no impending proceedings. …. the reason why you don’t publish it is not because you’re opposed to transparency or opposed to government in the sunshine, the reason you don’t publish it is because it gives a huge advantage to your opponent in litigation if they have access to your legal advice it is like the Irish rugby team going into an international rugby match and in advance of the match handing over their line out calls to the opposition, it is a crazy idea.”

Creighton: “In the vast majority of cases the public interest is best served by ensuring that documentation, that advices that are available and the basis on which governments take decisions are actually available to the public…”

What for pity’s sake are they blatherin’ on about? Do they even know themselves?

We phoned Legal Coffee Drinker to find out what it’s all about.

LCD: “Lucinda Creighton is saying that, as a general rule, the advices of the Attorney-General should be made publicly available. Jim O’Callaghan, on the other hand, is saying that it should only be published, if at all, in exceptional cases, because of the risk that it might be used against the government in litigation.”

Broadsheet: “But surely not all advices given by the A-G relate to matters of litigation?”

LCD: “Indeed. As stated on the Attorney-General’s website, the Irish Attorney-General has a dual role, firstly, dealing with litigation by or against the State and, secondly, advising the Government on questions of public interest (e.g. pending legislation).”

Broadsheet: “So shouldn’t the second category of advice be publishable?”

LCD: [inserts Nespresso capsule] “I think by ‘litigation’ Mr O’Callaghan means not just pending litigation but also possible future litigation which might arise, for instance, in relation to to legislation on which the Attorney-General has advised. He states for instance, that disclosing the Attorney-General’s advice on the constitutionality of abolishing upwards-only rent review clauses would give pension funds ammunition in litigation taken by them against the State.”

LCD: “No, for the following reason. Not only is there no existing litigation by pension funds against the State in relation to legislation abolishing upwards-only rent review clauses, there’s absolutely no threat of any such litigation because, on foot of the Attorney-General’s advice, the legislation in question was never passed.”

Broadsheet: “But Mr O’Callaghan says ‘there are large pension funds who have huge amounts of interest in ensuring that there wasn’t legislation brought in prohibiting upwards only rent review sand if they had been given access to the legal advice of the Attorney-General they would have used it in order to defeat any challenge they had to the State in terms of the legislation that was brought in.’ “

LCD: [drains cup] “As set out above, such pension funds have no reason to sue the State at all, no legislation damaging them ever having been passed and the advice given, in fact, having been extremely beneficial to them. And, incidentally, talking about a litigant using information to defeat their own challenge makes no sense at all. I think there may have been some confusion here…”

Broadsheet: “Were there any other reasons given by Mr O’Callaghan to justify the decision not to disclose the A-G’s advice on upwards-only rent review clauses?”

LCD: “No. In his article in the Irish Times…Mr O’Callaghan says: “[o]utside of the area of litigation, should the legal advice of the Attorney General always be published then every foreign state will know every issue of international legal concern that is being considered by the Irish government,” but this can hardly apply to advice on the very domestic subject of rent review clauses.”

LCD: “Not on the reasoning given by him, no.”

Broadsheet: “Sean O Rourke says Mr O’Callaghan might (cough) be the next Attorney-General?

Broadsheet: “On the evidence presented, M’lady. it is an appalling vista. Is it not?”

LCD: “Why are you talking that way?”

LCD: “I don’t dabble in politics or conjecture.”

Broadsheet: “Nor tay neither!

Broadsheet: “We are. Thank you Legal Coffee Drinker. Forgive my boisterousness.”

27 thoughts on “Lucinda, Jim O’Callaghan And The Unpublishable”