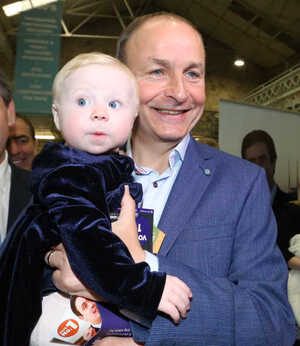 Micheál Martin and Kitty Lee at the Fianna Fail Ard Fheis in the RDS, Ballsbridge, Dublin 4 on Saturday.

A motion opposing any repeal of the Eighth Amendment [the 1983 constitutional ban on abortion] was carried at the Fianna Fáil Ard Fheis at the weekend.

“Since its passing in 1983, the Eighth Amendment of the Constitution (Article 40.3.3) has meant that Irish women receive all necessary medical treatment during pregnancy and at the same time has ensured that the unborn child’s right to life is protected. The reality is that tens of thousands of people are alive today thanks to the Eighth Amendment.
Despite the abortion legislation introduced by Fine Gael in 2013 which permits abortion throughout the full nine months of pregnancy in the case of threatened suicide with no medical evidence to back it up, the Constitutional protection contained in the Eighth Amendment must be robustly defended.
It is imperative that Fianna Fáil now builds on this commitment and works toward the repeal of the unjust abortion legislation introduced by Enda Kenny in 2013.”

Previously: The Eight Amendment on Broadsheet

61 thoughts on “Behind The Eight”