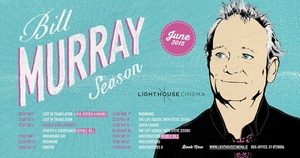 A month of Bill Murray movies.

At the Lighthouse Cinema, Smithfield, Dublin.

For the month of June we are screening a season of our favourite of his films. From Stripes to Lost In Translation and including a Ghostbusters double bill, a tribute to Bill and Harold Ramis and our very first big-screen karaoke party.

The Return Of Doctor Peter Venkman

9 thoughts on “The Life Cinematic”