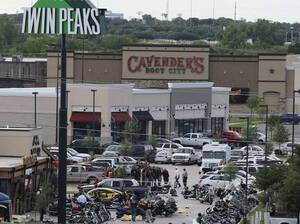 Sergeant W. Patrick Swanton said the Twin Peaks restaurant was littered with dead bodies, bullet casings, knives, weapons, shattered glass and pools of blood on Sunday night.
At least nine people were killed when fighting broke out between up to 200 bikers who gathered for a meeting in the city of Waco

A Dark Night In Colorado

Nothing Could Be Finer Than To Be In Carolina

22 thoughts on “‘Pronounced Way-Co Not Wacko’”