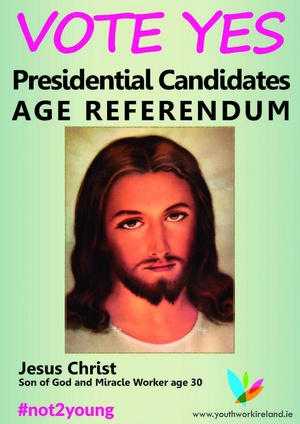 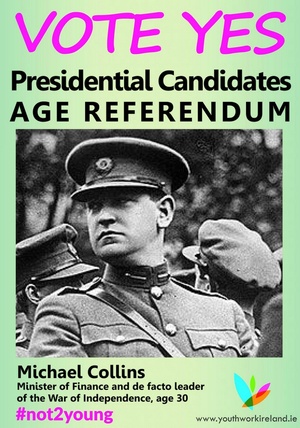 it should not be forgotten that there is a second equality referendum question on Friday seeking to revoke an arcane and ageist provision in our Constitution.

The obvious historical case of Michael Collins has been indicated persistently throughout the campaign. Yet would those still intending to vote No also bear in mind that this is a country where a 25-year-old Frank Aiken issued a ceasefire order to essentially end the Civil War; where a 30-year-old Kevin O’Higgins established An Garda Síochána; and where a 34-year-old Ernest Blythe presided over the finances of our then fledgling nation state?

Occupying the office of president in the 21st century is a proverbial walk in the park in comparison to those stark precedents.

It is strikingly dubious that a formal restriction applies for the role of head of state where no such barrier exists for the pragmatically more pivotal role of taoiseach. Furthermore, I doubt one would have been amused if such an age limit had correspondingly applied across the Irish Sea in the 1950s.

It should be emphasised that the initial nomination procedure to run for president and the ballot voted upon by the Irish electorate itself are both necessarily rigorous judgment phases for any candidate, regardless of age, to overcome, and therefore the current age parameters as set out should be considered superfluous.

We live in an age where the advent of social media will continue to actively develop the participation of younger people in politics into the near future. I fear that in a context where many students have enthusiastically registered for the first time specifically to vote on Friday, a majority vote to theoretically prevent those aged between 21 and 35 from running for the highest elected office in the land would thus strike a somewhat discordant, emblematic tone.

54 thoughts on “Martyrs To The Cause”