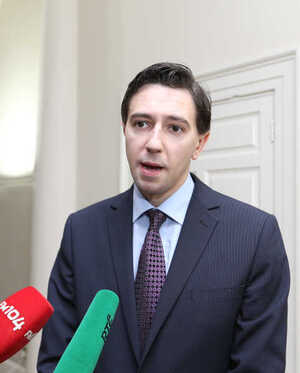 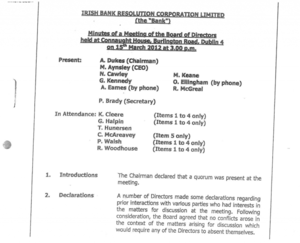 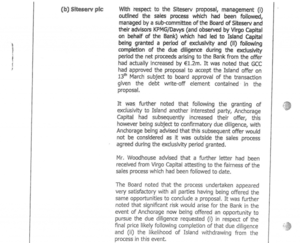 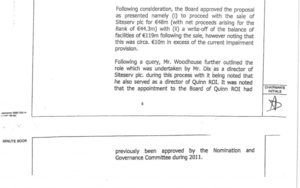 You may recall the IBRC board meeting minutes that were published by the Department of Finance last night.

They were from a March 15, 2012 meeting – the day the Siteserv sale to Denis O’Brien’s acquisition vehicle Millington was approved.

This morning, Fine Gael TD Simon Harris spoke to Audrey Carville on Morning Ireland and they  talked about a section of the minutes which appears to suggest there was a write-off of €119 million as opposed to the previously known figure of €100 million.

Audrey Carville: “In relation to those minutes from that meeting, which approved the sale of Siteserv it goes through that, ‘Following consideration, the board approved the proposal, to proceed with the sale of Siteserv, €48million, net proceeds for the bank €44.3million – a write-off of the balance of facilities of €119million, following the sale. However noting that this was around €10million in excess of the current impairment provision.’ What does that last bit mean? Because I think most people thought the write-off of the debt was around €100m?”

Simon Harris: “It’s impossible for you or I to ascertain this morning what exactly that means…”

Carville: “Is that new information to you?”

Harris: “I’ve seen, I’ve seen a number of figures in the public domain – in and around the €110 million mark. That obviously says €119 million. The reality is that we now have a structure in place to examine in a forensic manner all of those transactions and remember the bottom line here is, was the decision taken in relation to that transaction and any other transaction of concern done in a manner to minimise the loss to the taxpayer or indeed to maximise the return to the taxpayer.”

Carville: “So, you don’t know what that means? €119 million with around €10million in excess of the current impairment…”

Harris: “It’s not possible for me or you, or indeed anyone else sitting here today to know that figure and it will be the job of the Commission to interrogate that and other transactions.”

Carville: “Ok, but those minutes have been in the  Department of Finance for many, many months, well over, how many years now? Two years now at this stage. So why were we continuously told that it was around €100 million of a write-off?”

Harris: “I’ve seen figures saying that it was around €110 million, also Audrey…”

Carville: “But why wasn’t that clarified? If the minutes were in the Department?”

Harris: “Those minutes, in the Department, as I’ve said already and the minister has clarified already on a number of occasions were misplaced. It’s important to say that they were copies of minutes that were held in IBRC, now a full copy of those minutes back in the Department of Finance that will be available to the Commission of Investigation.”

Carville: “But it all leads to a perception that information is being kept secret.”

As you may know the minutes show former IBRC senior executive Richard Woodhouse – who managed Denis O’Brien’s loans with IBRC – was present at the March 15 meeting and discussed the sale.

This appears to contradict former IBRC chairman Alan Dukes who, during a press conference on April 24 of this year, said Mr Woodhouse “was kept out of discussions over the Siteserv deal within IBRC, as he also managed the relationship between the bank and Mr O’Brien.”

Further to this, readers may wish to note that in the redacted judgement, in the cases involving RTE versus Denis O’Brien and RTE versus IBRC, issued by High Court judge Donald Binchy yesterday, there is mention of Mr Woodhouse.

The judgement says RTE journalist David Murphy intended to report how Denis O’Brien spoke with Mr Woodhouse – who was also primarily responsible for managing the Quinn Group and pursuing the Quinn family over loans during his time at IBRC – and CEO of IBRC Mike Aynsley about extending the repayment of his loan facilities. 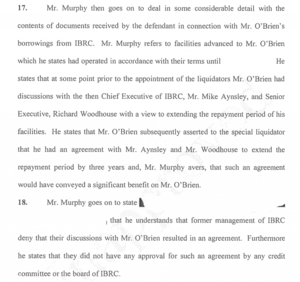 In addition, the minutes mention that:

“Following a query, Mr Woodhouse further outlined the role which was undertaken by Mr Dix as a director of Siteserve plc. during this process with it being noted that he also served as a director of Quinn ROI. It was noted that the appointment to the Board of Quinn ROI had previously been approved by the Nomination and Governance Committee during 2011.”

What was the query and why was the Quinn Group mentioned in discussions about the sale of Siteserv?

Listen back to Morning Ireland interview in full here

You Didn’t Really Think Sean Quinn Was Broke, Did You?

Now The Story Of A Wealthy Family