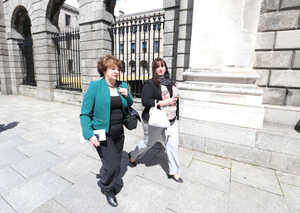 How did we get here?

And what have we learned?

Recent events seem to have taken on a life of their own but it useful to look back to where it all began.

Back in early 2014 my team and I started looking at the circumstances surrounding the awarding of the controversial water metering contracts and the uncanny way that the same names seemed to pop up at every hands turn.

Crucial to our early research was a piece that Broadsheet.ie had done titled ‘Thicker than Uisce’ and this very detailed timeline led us into many different directions that have culminated in the events of the past few weeks.

I have been to every one of the Irish Water protests, I had six months on Leader’s Questions in the Dáil from June-December 2014 and I raised the water issue on nine of those occasions.

At all times I made the point that the protests and the reaction was about more than just water – it was about something bigger; the sense that things always seem to work in favour of the big guys and never the little guys.

I made a speech in the Chamber on December 4 and again on December 10 where I raised Siteserv and some of the names that have now come into the public domain through the FOI process.

I followed it up with a series of (ongoing) parliamentary questions and FOI requests and it was April 2015 before answers began to emerge – painstakingly slowly.

Roll on to recent events – a situation where significant information from extremely credible sources comes to my attention; information which I firmly believe to be in the public interest.

I believe I have a duty, as an elected representative, to pursue the truth, to get to the bottom of the situation and to ensure that at no stage were the citizens of this country disadvantaged for the benefit of some powerful people.

In pursing that objective I used every parliamentary avenue open to me including taking to my feet on the floor of the Dáil and putting the allegations to the Minister and asking him to let people know the facts.

I never for a second considered that somebody with money and power would somehow influence how my privileged words would be, or not be as was the case, reported in the majority of media outlets across this country.

For anyone to claim that this was never the intention is belied by the letters and emails received by numerous media outlets, including Broadsheet, warning them not to report my speech.

What is really concerning is that most, though thankfully not all, media outlets bowed to the pressure. The fear of deep pockets managed to control almost the entire press corp of the country.

In the age of social media we are lucky that many citizens had the opportunity to access fair reports as is their right, however a large cohort of our citizens still rely on mainstream media and until the Sunday Times took a stand on the Sunday following my Thursday afternoon speech, those citizens were bereft of information from their elected parliament. That cannot be acceptable.

There has been a very valuable lesson in this. We have got to look at how our Fourth Estate operates. Issues such as ownership, editorial v legal considerations and public interest must be evaluated and mainstream media organisations now have to pose some very serious questions to themselves about what is more important; their role in democracy or their fear of upsetting the wrong people?

The parliament and the judiciary for their parts, must now look at our defamation laws and assess whether or not they are fit for purpose. It is not enough to know what went wrong; we must take steps to put it right to ensure we never have a repeat of this debacle.

95 thoughts on “An Unstoppable Force”