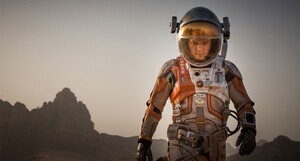 1. An astronaut gets stranded alone on Mars and has to be saved. It was a book by Andy Weir. Or it’s a remake of Robinson Crusoe on Mars (1964). YOU decide.

2. To get lost in space once may be regarded as a misfortune; to get lost twice looks like carelessness. Science the shit out of that Matt Damon.

3. Stellar cast though. It’s a veritable who’s who.

4. Fox pushed the US release of the film ahead by two months to avoid a run in with the new Hunger Games (2015) and the latest Rocky flick (2015). Daniel Radcliffe’s latest, Victor Frankenstein, has been pushed to November instead.

5. They are going all out with this one. There are viral videos and even scripts getting launched into space.