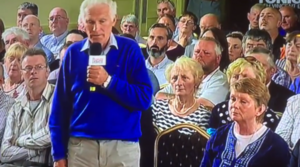 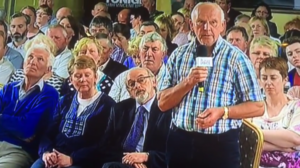 From top: Former residents of the Tuam Mother and Baby Home, Peter Mulryan, and PJ Haverty

Ms Corless said Peter has a sister buried at the home but explained that he doesn’t know where she’s specifically buried.

Both men then spoke.

“In the mid-Forties I was born in Tuam, in the home there and my mother was separated from me, just after a year of being there. I was taken out of there after four and a half years in that area which was absolutely shocking. Every child there went through that system, came out with pot bellies and why?

If you starve an animal or a dog, what way do they look? That’s the way we looked. It’s frightening to think we went through the same system and I inquired why this happened. I looked for information from Galway County Council, I looked for information from the church, I’m now asking the State to get heavily involved in this, as Catherine is after saying there, I also have a sister laid somewhere around, I don’t know where. I’m making inquiries, nobody can tell me where that angel lies tonight, nobody. And I will find out, no matter how long it’s going to take, what was done to my sister, laid somewhere and no record.

We have a birth record and we have a death certificate but no one will tell me where she is laying tonight. And this is one of the questions I’m asking of the church and the council and the State: to get me answers because I must find, I must find out where. Because I don’t want her lying in what I was told where she may be but we will find out sooner or later…”

“I was four and a half years there, I was adopted out in not nice conditions whatsoever. [My earliest memories were] isolated. I’m not worried about work but the way I was treated, every day I got up: beaten. I dreaded summers for the simple reason here, I never spoke about this before.

Many would get beaten with a rod or a stick, I was treated with nettles. Nettles put inside my trousers. I hated seeing summers coming because I knew this was going to happen again. I was put into a bag one day, I was told I was going to be put into the bog hole. That was my life story. I could go on for another hour.”

“The [foster] mother was an absolute angel and she would often say, when I was being hammered, ‘you might want him yet, some day’ and it did happen. I did [meet my birth mother] with a struggle. But I did meet her, she was in the home for 35 years. I wanted to take her out. I used to take her out once a month and I was told I was coming too often.

But I wanted to take her to our own home but was denied the chance and she died of a broken heart in that place, where she worked for 35 years in slavery, in a laundry where she worked in a cold yard, frosty mornings and the old-fashioned way of washing clothes and they couldn’t talk to their friends beside them. Nobody knew what was going on within the system.

They couldn’t talk about their life or complain. They were never let out to do shopping, anything. They were just what I call, like myself, nobody. She died there and I didn’t know it in time to visit her either. She died aged 84 and she’d been there 35 years.”

“I was born in the home in Tuam as well and I spent six and a half years there and I was told that I went to the national school for two years, which I did and we had to go in ten minutes late in the morning and leave ten minutes early in the evening, so as we wouldn’t mix with the kids from outside, in case we’d tell them anything about what went on in the home.

And in the playground we were cornered off in a section so we wouldn’t be allowed to play with the other kids. So, lucky for me, I finished up in a fantastic foster home and I was looked after very well and then my foster mother was very good to me and we decided to go looking for my birth mother because she felt sorry for my birth mother. So after great work, a social worker accidentally left a file opened and my mother’s name and the address was on it, so I worked from there and she was in Brixton in England. And she had married with no family.

So, when I got to meet her then, she told me what had happened in the home. That she was rejected by her own parents because of the Catholic church, being pregnant outside of marriage, and had to be taken to Tuam. And they didn’t have the hundred pounds to pay.If she did, she’d have the baby and be released again straight away.

But she had to stay there for 12 months, to work there as a slave, looking after the babies, cleaning and tidying the place. So when the 12 months was up she was shown the door and told to get out and I was going to be fostered out.

So she went down to the hospital in Tuam and got a job there as a cleaner. So every so often she would make that 10 minutes, 15 minutes walk to the home and knock on the door and ask could I be seen, could she talk to me, ‘could I take him away from there altogether, I want to look after him’ and they said, ‘no’, they closed the door on her face. And she spent about six years doing that. Til eventually I was fostered out then and she decided then, there’s no hope staying here, so she went to England.

And she went to Brixton then and she married there. But had no family. And she told me this story and I thought about Our Lord being crucified but my god these mothers, you know in the homes throughout Ireland, were crucified. And I blame the church, I blame the State and I hope that you don’t delay and get to the bottom of all this and not to drag it out like we’ve all these tribunals going on 20, 15 years.”

Throwing Us A Bone