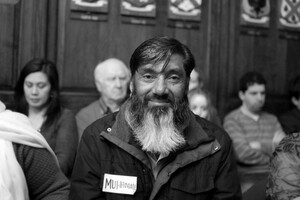 Muhammad Younis grew up in a rural area of Pakistan. He has a wife and nine children. In 2002, Muhammad was recruited for a good job as a chef in a tandoori restaurant in Ireland. He was promised a work permit and decent pay. He took up the offer and moved thousands of miles away to support his wife and children back home, so they could have a better life at last.

Instead of the promised good job, Muhammad endured 7 years of slavery. He worked 80 hours a week in the cramped, unventilated and overheated kitchen of a takeaway in Clondalkin. He was paid just 51 cents an hour for the first 3 years and given just one day off each year – Christmas Day.

His passport was taken by his employer; he was constantly threatened and verbally abused. His every move was controlled; he was a virtual prisoner, shuttled between the kitchen and the small 2-bedroom house he shared with nine other workers. When his work permit ran out, the employer refused to renew it – to further control Muhammad, who was terrified of being deported. Muhammad was unable to reach out for help as he spoke only Urdu. He was completely isolated.

After 2 years, Muhammad was vindicated: the Rights Commissioner awarded him €92,634.42 in unpaid wages and compensation. This award was upheld by the Labour Court.

However, Muhammad’s employer brought the case to the High Court. He claimed he should not have to pay as Muhammad was undocumented and therefore the contract was illegal – so he should not have to honour it. Remember, it was the employer himself who had refused to renew Muhammad’s permit and had used Muhammad’s undocumented status to further isolate and threaten him. The judge ruled that as Muhammad did not have a valid work permit, he was not covered by employment legislation, and so he was not to receive a single cent in unpaid wages or compensation.

Muhammad Younis was brought to Ireland for the express purpose of exploitation; he was a victim of trafficking for forced labour. For 7 years he endured slavery, abuse and isolation. After all that, he was left with nothing and his employer got off scot-free.

In March 2012, having failed Muhammad Younis in every possible way, the Irish state informed Muhammed that it intended to deport him. Again with the help of MRCI, Muhammad appealed to the Minister for Justice and was granted Humanitarian Leave to Remain in Ireland.

“The Supreme Court has OVERTURNED the High Court judgment and upheld the Labour Court award of €92,000 to Muhammad Younis! We are stunned, emotional and absolutely overjoyed for Muhammad. His strength and patience and perseverance have been vindicated in a unanimous judgment by the highest court in the land.”

Care In The Home

51 thoughts on “Seven Years A Slave”