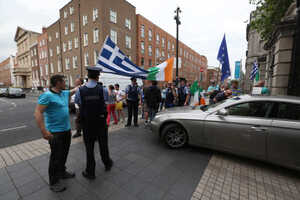 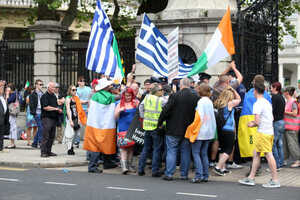 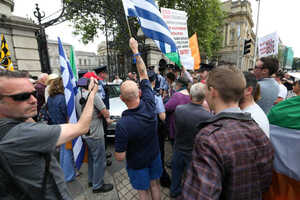 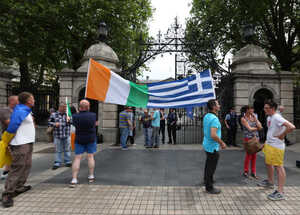 Anti-Irish Water and austerity protesters in solidarity with Greece outside Leinster House, Dublin this afternoon. 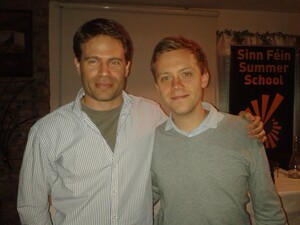 Syriza has to be broken, or so the EU great powers decided long before it was even elected. But how? First: compel it to impose another dose of disastrous austerity, in violation of the party’s clear electoral mandate. This would inflict on it the same fate as the Greek social-democratic party Pasok, which so alienated its support base that its vote plummeted from 44 per cent in 2009 to 4.7 per cent by 2015.

A second possible strategy: strangle Greece’s economy until the people decide that the lesser catastrophe would be to resign themselves to endless austerity within the eurozone. This is the current course of action.

The third strategy: force a default and drive Greece out. However, this might expose the eurozone’s Achilles heel. A precedent would be set: the eurozone would no longer be an indivisible currency union, but a club that weaker members can leave or from which they can be de facto ejected. Italy, say, could find itself the subject of extreme market speculation….

The elites are determined to end the revolt against austerity in Greece (Owen Jones, New Statesman)

Greece Shuts Down Its RTE

56 thoughts on “Give Greece A Chance”