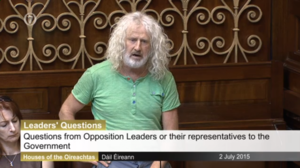 “A few weeks later, a report by a Northern Ireland auditor’s office seriously questioned the stewardship of the Northern Ireland housing executive which led to the resignation of Brian Rowntree and Frank Cushnahan.

The report found breaches of a housing executive’s guidelines, in the sale of at least 27 land deals, executive board given wrong or no information relating to key property deals, favoured property speculators were allowed to buy land well under market value. Interest from other parties were not declared or considered and, at times, no reasons offered for some off market sales. Tanaiste, these two individuals stayed in Nama – one of them up until the summer of 2014…..

Later, Mr Wallace spoke again – before his microphone was turned off by the Ceann Comhairle Sean Barrett.

Wallace: “The legal firm acting for Cerebus Capital, who actually purchased the Northern Ireland loan portfolio for €1.5billion was Tughans, of Belfast. Now it’s been reported that during a routine audit of Tughans…”

Sean Barrett: “Sorry this is not an inquisition. This is Leader’s Questions. Would you put a question? You’re out of your time.”

Barrett: “You can’t use the chamber to make cases against people who are not here to defend themselves and you know the regulations as well as I do and you’ve been reminded often enough. Now please stick to the Standing Orders or else I’ll have to cut you off. As your question.”

Barrett: “This is not, there are other places to make these charges but not in the House here where people are not here to defend themselves. I don’t know anything about these people but there’s a rule and I have to apply the rules now please adhere to them.”

Wallace: “I’m not telling anything that’s…”

Barrett: “I’m just asking you to adhere by the rules of the House. If you wish the rules to change, bring them to the Committee of Procedure and Privileges. Now would you please put your question to the Tánaiste.”

Wallace: “Tanaiste, do you have any concerns that a routine audit of the solicitors’ firm that looked after  that particular deal, where €4.5billion of assets were sold for €1.5billion with a massive loss for the Irish taxpayer, a routine audit actually showed up where €7million in Sterling ended up in an Isle of Man…”

Wallace: “It was reportedly earmarked for a Northern Ireland politician or party…”

Barrett: “Would Deputy Wallace give all those details to An Garda Síochána? That is what it is there for.”

Readers may wish to recall how, a few weeks ago, Independent TD Mick Wallace raised concerns about Nama in the Dáil.

“When NAMA was set up, the plan was that it would not flood the market with stressed assets. This was a special purpose vehicle that would await some form of recovery before maximising the assets in the interests of the taxpayer. That is not what has happened. For some strange reason, NAMA has been in a hurry to fire sale assets for less than their real value despite the fact it is a rising market.”

“…I will give two examples. An office block on Mount Street was sold off market in 2012 by NAMA to US fund Northwood for €27 million. In 2014, Northwood sold it for €42 million. Most of the money was financed by NAMA in the first place. This is in a country where small and medium-sized businesses cannot get a cent out of financial institutions. NAMA sold the Forum building in the IFSC in 2012 to US private equity firm Atlas Capital for €28 million. Less than two years later, it was sold for €37.8 million, a 35% profit. If the Taoiseach thinks this is good business, I think otherwise.”

14 thoughts on “Project Eagle And The €3.5 Billion Haircut”