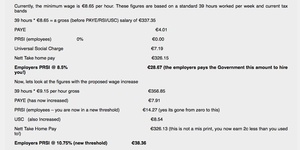 Are you on the minimum wage.?

Have you staff on the minimum wage?

Of this arithmetic (above), which factors in the government’s proposed increase in the minimum wage, small business owner and blogger Paul Treyvaud [probably not paying himself the minimum wage] writes:

This [above] is very alarming for so many reasons. If you are currently on the minimum wage, you now earn less with the Government’s wage increase. Your employer is now under serious pressure to find the money to cover this increase.

You are now at risk of losing your job in order to keep others. Inflation will rise to cover the cost of the wage increase which means everything becomes more expensive which means not only are you 2c less off per week, your cost have living has now increased and you are actually far worse off!

A total tax increase of circa €98.8million

We are being lied to, plan and simple. If a Government can tell you what a wage is being increased to, then why the hell can they not tell you what the change in the tax credits will be. This proposed increase in wages is in fact a decrease and a whopping €100m windfall for the Government coffers.

20 thoughts on “Doing The Minimum”