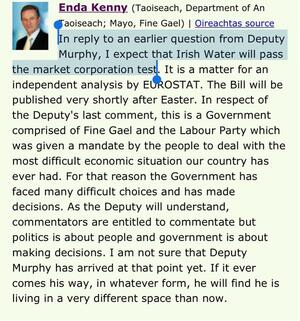 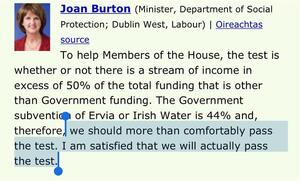 Screenshots from transcripts of Taoiseach Enda Kenny and Tanaiste Joan Burton speaking during Leaders’ Questions in the Dáil on March 25, 2015 and November 20, 2014 respectively

It is being reported this morning that Eurostat will rule that the State funds spent on Irish Water will have to remain on the Exchequer balance sheet until at least 2017.

“The ruling on the so-called market corporation test – to decide whether Irish Water is sufficiently independent of the exchequer to remain off the State balance sheet – is expected to be detailed by the European agency today.”

“It will say that Irish Water must remain on the State’s balance sheet, for the moment at least, meaning the money spent on it will count towards the annual deficit and national debt as measured for EU targets.”

“The ruling will come as a surprise, following what is understood to have been a strong recommendation from the Central Statistics Office in Ireland that Irish Water qualify as a market corporation.”

“The reasons for the Eurostat ruling are not clear, but are likely to centre, in part at least, on the €100 annual grant that the Government agreed to pay to households that signed up for Irish Water.”

Michael Noonan tells us Alan Kelly is "away for a few days". Lucky him