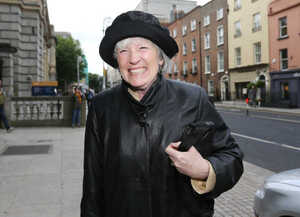 “I could not get the image out of my head of a shark eating its own entrails. As time went by I became ever more doubtful of the fundamental banking concept of loans as assets, and indeed of debts in any business as assets. The only asset that reassures me is something I can control and I cannot control the repayment of debt owed to me.“

“The bonus system in banks is crazy. You get a bonus for lending money out. There is no incentive to get it back in. Such a system encourages greed and recklessness. It is no wonder that banks go bust from time to time.”

“Probably until the last syllable of recorded time this will be argued by politicians, economists and journalists. My personal view as a citizen of the Republic of Ireland, perhaps to some extent influenced by hindsight, is that it was indefensible for the government in September 2008 to in effect yield the sovereignty of this country in order to shore up a banking system that is entirely of and for itself and will never change. I do accept, however, that many grave problems would have arisen if one or more banks had failed and that the full extent of the bad debts were not known at the time”

“I have never had a relationship with any member of the Government, nor the Oireachtas , nor the property sector . I do not golf, do not visit tents at racecourses and am not invited to dinners. But my sense, as a citizen of Ireland and as a director of EBS for nine years, is that there is a deeply unhealthy relationship between all four.”

A portion of former EBS Building Society Director Ethna Tinney’s opening address to the Banking Inquiry today. Ms Tinney’s appointment was part of an experiment by EBS to allow ‘real people’ on to its board. That’ll learn them.

26 thoughts on “An Education”