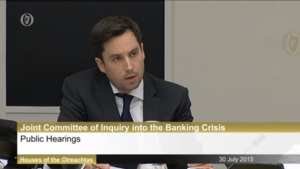 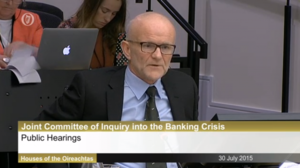 Eoghan Murphy: “Are you saying that when you were an non-executive director of Anglo Irish Bank, you never made a contact with the Minister for Finance or the Taoiseach on behalf of the bank?”

Murphy: “Well I’m sorry, how can you explain then, the phone call you organised between Sean Fitzpatrick and…”

Drury: “Sorry, I beg your pardon, I thought that, I assumed given that I’ve given a clear account of that that you were asking, you know, beyond that..”

Murphy: “No I’m asking why in your written statement…”

Murphy: “In your written statement you said you believed you were not equipped to answer on the appropriateness of relationships between the Government and the banking sector. And when I asked you to elaborate on that, you said that you were here to account for your role as a non-executive director of Anglo and that that didn’t pertain to my line of inquiry and then I asked you if, as a non executive director, did you make contacts on behalf of the bank with the Government, to which then I think – in a long-winded answer – that you did not but in fact, you did.”

Drury: “Yeah but with respect, I mean, I absolutely accept that..”

Murphy: “I want to clarify that because..”

Murphy: “It’s just that it wasn’t acknowledged in the written statement that you didn’t supply and I was wondering why and you’ve tried to explain that. Can I ask you then just to clarify. The contacts that you laid out to us, in your opening statement. Are they the only contacts that you made on behalf of the bank, with a member of Government?”

Drury: “As far as I can recall: yes absolutely.”

Murphy: “Do you recall a board meeting in early 2008 in which the possibility of the NTMA placing further deposits in the bank was discussed?”

Murphy: “I’m talking about an article from the Irish Independent which discussed, or which details a board meeting that was held in early 2008 at which the placing of deposits by the NTMA with the bank was discussed.”

Drury: “Well the position in respect of this…”

Chairman Ciaran Lynch: “Sorry Mr Drury, are you familiar with the article?”

Murphy: “I don’t know the source of that article. This is an article provided by the legal team this morning, chair. It’s from the Irish Independent. It’s entitled, The political contacts and controversies inaudible from May 2014, I think.”

Drury: “I never discussed, at any board meeting making contact with either an individual, i.e. Brian Cowen as Minister for Finance or the Department of Finance, in respect of any issues regarding Anglo Irish Bank. I never would have allowed any discussion arise at a board meeting of Anglo Irish Bank or Paddy Power where there could be potential for a conflict between my role as a board member and my relationship with Brian Cowen.”

Murphy: “Ok, thank you. We’ll move on to the Heritage dinner if we may.”

Murphy: “Just to clarify some things around…you arranged the dinner, is that correct?”

Drury: “Well, I, as I explained in my, as I explained in my opening statement, deputy, I, it fell to me to see whether Brian Cowen would be prepared to attend what initially was going to be a lunch in the manner in which other public servants, public servants and senior politicians, political figures had over the ten years or so, as I’ve explained in my opening statement. And because I was known to be a friend of his [Brian Cowen] I approached him and asked him if he would do it. It was then the organisation of the dinner would have been managed by other people within the bank.”

Murphy: “Do you see a possible conflict of interest in using a friendship with the Taoiseach or the Minister for Finance to set up these types of contacts, to set up these dinners?”

Drury: “Well, you’re referring to these types of contacts.”

Murphy: “Sorry this dinner in particular.”

Murphy: “And you attended the dinner with Mr Cowen. How long did it last for can you remember?”

Murphy: “And do you recall any formal presentations or documents.”

Drury: “There was none.”

Murphy: “None? Do you recall Mr Cowen arriving with a document.”

Drury: “I arrived with Mr Cowen. He did not arrive with any document.”

Murphy: “And he didn’t leave with any document?”

Drury: “And he didn’t leave with any document.”

Drury: “Because I left with him.”

Murphy: “And can you recall from the dinner, any discussions surrounding problems with funding for Anglo?”

Drury: “Absolutely not. I mean I can recall other things, I would recall it if such a discussion had…”

Murphy: “No discussions around NTMA?”

Drury: “No but there was no general discussion around the NTMA, if you follow me.”

Murphy: “Moving on to the other occasion then, the Druids Glen outing.”

Murphy: “That was, was it lunch, golf and then dinner? Is that correct?”

Drury: “A meeting over coffee and then three of us went to play golf and then the five of us had dinner with, we were joined by Brian Cowen’s driver.”

Murphy: “And how long of a total engagement are we talking about in regards to the interaction between Mr Cowen and the representatives of Anglo Irish Bank?”

Drury: “Well, first of all, we weren’t representatives of Anglo Irish Bank. So let’s be clear that Gary McGann was chief executive of Smurfit Kappa, Sean Fitzpatrick was chief executive of Anglo Irish Bank, Fintan Drury was a former director of Anglo Irish Bank, not at that time, and Alan Gray was a director of the Central Bank. So, and they were, they were selected for that discussion on the basis that, prior to going on holidays, I had had a discussion with Brian Cowen about the value of having a number of smart people around a table to discuss with him some of the more substantive economic issues that, not just economic issues but primarily economic issues that were facing the country at the time and which he, as Taoiseach, might do to get some outside perspective. And Brian Cowen was pretty concerned that there would be any misunderstanding by anyone who would be approached and asked to be involved in such an exercise that he was in some way creating a kitchen cabinet. This was a kind of one-off discussion to explore areas that outside people might be able to give him guidance on.And the reason the people who were at that event were chosen because it was a combination of people I know and people who Brian knew. Brian had great belief in Alan Gray, as many people in politics and in the civil service do so he wanted him there. I knew Alan but not well. He wanted Gary McGann there because, as I referred to in my opening statement, he had a view that Gary was very smart, very committed to public service, he was I think at the time a former chairman, if not still chairman of the Dublin Airport Authority, had committed himself to a number of roles in public service but he was also chief executive of one of Ireland’s largest companies which had a global reach and Sean Fitzpatrick was my suggestion. And the suggestion was made at the time when Sean Fitzpatrick was deified. It’s an exaggeration but his reputation was both globally and in Ireland extremely high and he was seen as somebody who was extremely bright and extremely talented and would have therefore value to add. And it was done on that basis.”

Murphy: “At any point was Anglo Irish discussed?”

Murphy: “At any point was liquidity or solvency issues in the bank discussed.”

Drury: “No, no, actually interestingly, the agenda which Alan prepared and brought with him, when we gathered had to my memory had no reference to the kind of issues which dominated subsequently, if you follow me like the ones your referenced.”

Murphy: “You were there to discuss the economy and what was happening globally.”

Murphy: “And at no point, the banking problems that had already begun in 2007 came up? Northern Rock? Bear Stearns?”

Drury: “Yeah, I mean I’m not saying that, you know, there was no discussion about the fact that there was a, a very significant global, the start of, more than the start, the emerging economic difficulties which were partly being fuelled by significant financial difficulties. I’m not saying that that wasn’t the backdrop if you like. But what I’m saying to you is, to be clear, deputy, what I’m saying to you is, is that at no point was there any discussion whatsoever about Anglo Irish Bank and the question I posed in my opening statement was to say well, ‘why would there have been…'” 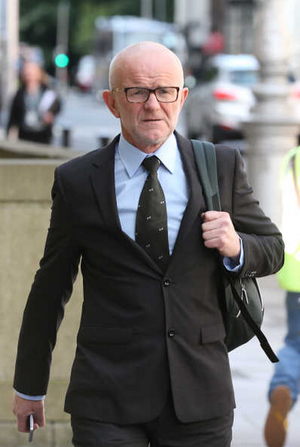 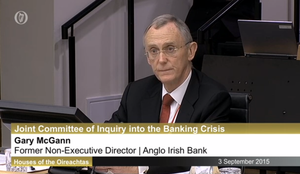 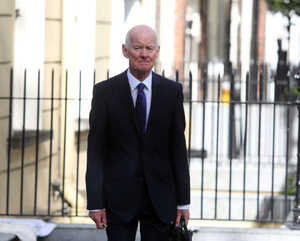 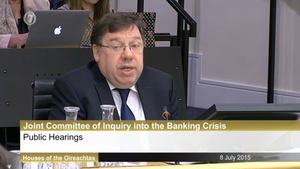