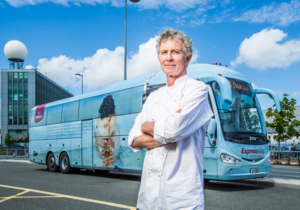 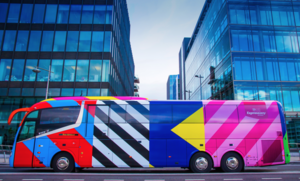 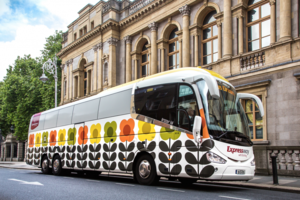 From top: Chef Kevin Thorton and a bus wrap displaying a design that includes Tea Stained Quails Egg with Caviar – his signature dish; a bus covered in a design by Maser; and a bus covered with an Orla Kiely original print

These have been designed by top Irish talents – including Orla Kiely, Kevin Thornton and Maser – to mark Expressway’s support as official transport partner for ID2015, the year-long Government-backed initiative promoting and celebrating Irish design in Ireland and internationally.”

“The concept was developed by Laura Magahy, Executive Chair of ID2015, with the aim of demonstrating the breadth of internationally acclaimed Irish designers in every field.”

26 thoughts on “If The Bus Is Shocking”