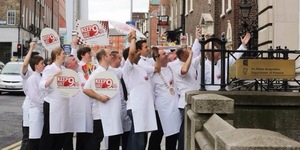 A specific number of 21,633 direct jobs have been created in the accommodation and food services sector since the VAT reduction in July 2011 apparently.

But some people still aren’t happy.

SIPTU has called on the Government to commit to removing the preferential VAT rate currently enjoyed by the profitable hotel and restaurant sector that includes many businesses that are exploiting low paid workers.

According to new figures released this week the hospitality sector is booming. A new independent survey by accountancy firm Crowe Horwath indicates that the average profit on each hotel room in Ireland grew from €7,347 in 2013 to €9,201 in 2014. The Government introduced a 9% VAT rate for this sector in 2011. This has enabled increased profits.

This situation needs to be tackled now, otherwise the Government’s entire strategy on protecting low paid workers is in real danger of being undermined

It Still Beats Going By Ryanair

Look How ‘The Economist’ Illustrates Our Woes

All You Need To Know About Toothpaste

14 thoughts on “Siptu It May Concern”