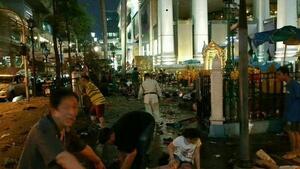 “There has been a large explosion close to a shrine [Erawan Shrine] in the centre of the Thai capital, Bangkok. Local TV has initially reported five dead and 20 injured and quoted police as saying it was caused by a bomb.”

“The BBC’s Jonathan Head, who is at the scene, says there is a huge amount of chaos with body parts scattered everywhere and a crater that does indicate a bomb attack.”

Cauliflower: The Explodingest Vegetable Of Them All

3 thoughts on “In Bangkok”