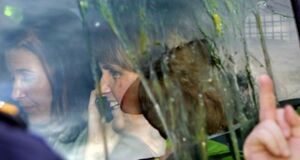 When defending civil disobedience and non-violent protests nothing trumps King.

Last week we learned that over 20 anti-water charges protesters are expected to be brought to court shortly in relation to the events in Jobstown last November. You will recall that this is when Joan Burton was held up in her car for about 2 hours and when someone threw a water balloon at her.

The police arrested 40 protesters in the wake of the events in Jobstown, including a number of teenagers and three public representatives. This means that about half of them will be charged with a range of offences, including “violent disorder”, “criminal damage”, and “false imprisonment”. A conviction on the latter charge almost always leads to a jail sentence, and possibly a life term in prison. Yes, you read that right: imprisonment for life for keeping Joan Burton in her car for two hours.

I’m currently traveling in the US South and visited the Center for Civil and Human Rights in Atlanta and related landmarks. The civil rights movement of the 1960s in one of the most important periods in US history as it indeed civilised the country. For example, black people gained important rights through sustained campaigns of organised civil disobedience.

One striking thing about progressive social protests is that the principles they embody don’t change that much historically. Basically, when facing an oppressive structure of power that denies them fundamental rights or opportunities, and when negotiations with the ruling class lead nowhere, people decide to take other means to pressurise political leaders to change.

Protesters are inevitably labeled as ‘deviant’, ‘dangerous’ and ‘radical’ by “respectable” and “very important” people. But well organised and united campaigns are often successful in securing rights that in later years are taken for granted, often forgetting, unfortunately, that they were won through struggle, not because ruling classes granted them out of generosity.

The history of the civil rights movement is fascinating and its lessons it provides for today are numerous.

For example, in 1963, civil rights leader Martin Luther King Jr. was thrown in jail for peacefully protesting. There, he wrote his “Letter from the Birmingham Jail”, which explains some principles directly relevant to the anti-water charges movement and other campaigns. The Letter is a short read and is available here.

First, civil disobedience, or breaking the law nonviolently, is justified if the law is wrong. The law reflects the structure of power in a society and as such often benefits the powerful. After all, as King said, “We should never forget that everything Adolf Hitler did in Germany was ‘legal’”.

Similarly, legal codes in the US made slavery and segregation legal. In the 1950s and 1960s, blacks refused to yield their seats on public buses to whites even though this was what segregation laws ordered. They sat at restaurant counters reserved for whites, against the law. Activists organised ‘freedom rides’ on Greyhound buses through the South with whites and blacks sitting in seats normally reserved for whites only. For all this, they got arrested, beaten, jailed, and killed. They were doing things illegal, but right.

Second, the immediate enforcers of the law are the police. Although often depicted as preserving “order” and “preventing violence”, the police in fact serve power and often arrest those who attempt to win their rights or fight injustice. That’s one reason why our political leaders who have enabled the US military to use Shannon airport on its way to destroying Iraq have never been arrested or imprisoned, but water charges protesters have.

Third, nonviolent direct action seeks to force ruling classes to negotiate when they have refused to do so. Waiting passively for political leaders to change their ways is bound to fail. They know very well that what they are doing is wrong, because they benefit directly from it. Waiting passively only leads to delaying justice indefinitely, and “justice too long delayed is justice denied”.

Indeed, “freedom is never voluntarily given by the oppressor; it must be demanded by the oppressed”. As King stated, “we have not made a single gain in civil rights without determined legal and nonviolent pressure”. Hence the need for organised, effective popular actions including boycotts, sit-ins, marches, etc.

Those principles have guided some of the direct action protests against water charges. Similarly, they may well lead to the imprisonment of a number of activists.

Paul Murphy TD said he hoped he would not be jailed. However, if he is, along with others, this may mark a positive turning point in the water campaign movement. My guess is that this would energise the anti-water charges campaign. Opposition parties would capitalise on the situation. Austerity parties—Fine Gael, Labour, Fianna Fáil—could lose some popular support. International media could cover the story critically, conveying the message that the Irish government can’t handle its domestic affairs. The government could thus shoot itself in the foot.

131 thoughts on “Requiem For A Dream”