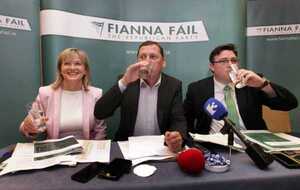 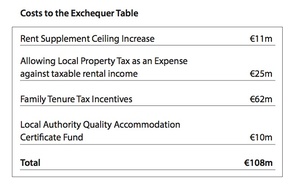 The document [at link below] sets out a number of new policy initiatives that “will help people struggling in the rental market, ensure quality accommodation and rent certainty”. Costings above.

There are 100,000 people on housing waiting lists nationally, more than 42,000 in Dublin alone. This didn’t happen overnight. Lots of these people have been waiting on a home for ten years or more. Lack of affordable housing is not a ‘problem’ for government, they depend on it to drive up rent, property and land prices.

This government has figured out that to have a reasonable chance of reelection, it need only pander to its core base of the comfortable class, many of whom are landlords or have a vested interest in a booming property market (as do many TDs themselves). People on housing waiting lists don’t vote for Fine Gael.

Those that did vote Labour in the hope that their needs would be addressed have been rightly stuffed as Labour presided over an 82% cut to social housing provision budgets between 2007 and 2014. This chronic under-funding coupled with the more than €170 million euro of cuts to rent supplement since 2010 has created a whole new class of homeless people.

Homelessness Is The Plan (Ramhorne Republic)

The victims of this dysfunctional market include families forced to live with their in-laws or in temporary accommodation, and professionals who cannot afford to buy in metropolitan Dublin, and are pushed ever further out into the commuter belt. There is also a growing homelessness problem. In a country where home ownership is the norm, or at least the aspiration, for most families, housing could become an acute political problem ahead of a general election within about six months.

34 thoughts on “Renting And Raving”