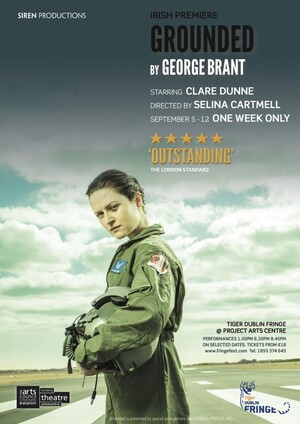 I’m writing to you about Grounded, a multi-award-winning play about a female fighter pilot who is grounded when she gets pregnant, and then returns to work as a drone operator.

​The play will have its Irish premiere during the Fringe, ​at Project, Temple Bar, Dublin, 7th-12th Sept, with previews 5th & 6th.

The p​roduction​ is directed by Selina Cartmell (who also directed Bog of Cats currently on the Abbey stage,) and stars Irish actress Clare Dunne The play has been a global phenomenon and won many awards. ​

We have a pair (yes just one PAIR) of tickets to the September 8 performance to the first Broadsheet reader to name the actress who played the pilot in the US production of Grounded?

Grounded at the Project Arts centre

9 thoughts on “Prepare For Take Off”