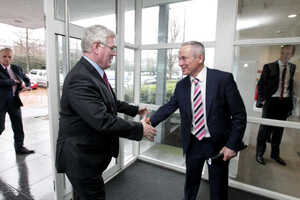 June 2007. The Green Party negotiators were chastened on withdrawing from talks on the formation of a government, but they wouldn’t be asked back to the table by Fianna Fáil.

Bertie Ahern, who wanted the assurance of additional Green votes, was re-elected Taoiseach by the members of the outgoing government, which included the much reduced Progressive Democrats and the gene pool independents.

Within a year testimony at the Mahon Tribunal had undone Ahern. Brian Cowen was elected leader of Fianna Fáil by acclamation.

Before being elected as Taoiseach Cowen sought talks with the new Labour Party leader, Eamon Gilmore. Stressing the need for a government with a stronger majority, he also stated that the 1993-94 government was one he felt was working and he wanted to re-establish that ‘natural’ relationship.

In June 2008 the second FF/Labour government was formed. The PDs and gene pool independents were jettisoned.

Eamon Gilmore was to be Tánaiste one of four Labour Party ministers with an additional five Labour Ministers of State. Brian Lenihan was appointed Minister for Finance.

One of the Labour’s conditions for entering government was an immediate budget, the effect of which was to greatly increase public expenditure.

The PDs, who had been discussing winding down the party, select Liz O’Donnell, now in the Seanad, as their new leader.

The Dáil had barely reconvened to consider the finance bill when a meeting was requested by the heads of the major financial institutions, to discuss fears of threats to the liquidity of banks.

The meeting hosted by Brian Cowen, was also attended by Brian Lenihan and Eamon Gilmore. It decides the government should introduce an all embracing bank guarantee.

Huge adjustments needed to be made to the finance bill, which included the introduction of a new universal social charge on gross income.

Whatever public goodwill was held by the government quickly dissipated. In the Local and European elections in 2009, Fine Gael and Sinn Féin were the big winners. Brian Crowley was the only FF MEP elected. Labour failed to win a seat. In Dublin, Eamon Ryan won a seat again for The Greens.

In the the resulting Dublin South by-election Liz O’Donnell returned to the Dáil.

Despite successful midterm elections a push against Enda Kenny begins in Fine Gael, where mumblings grow over his parliamentary performance. This results in Richard Bruton becoming leader. He appoints Lucinda Creighton as his deputy.

Labour in government tries to push a social change agenda and forces a referendum on Blasphemy, which passes, while also introducing civil partnership.

Public finances continue to deteriorate. By the middle of 2010 negative noises from Europe force the government to apply to the International Monetary Fund.

In 2011 the government selects Michael D. Higgins as a joint candidate. He loses to independent candidate Mary Davis.

Under the tutelage of the Trioka a number of measures are introduced, including water charges and a property tax. Three quarters of the budget adjustment is achieved by the time of the general election in 2012. The sad death of Brian Lenihan had seen Michéal Martin take over the Finance portfolio.

There is no political benefit. FF loses half its seats, Labour slips into single figures. Fine Gael, and to a lesser extent Sinn Féin, are again the big winners. Three Greens and two PDs were elected along with fifteen others. Michéal Martin becomes leader of Fianna Fáil.

Fine Gael, by far the largest party, forms a government with nine Labour and three Green TDs. Joan Burton becomes Tánaiste but is one of only two Labour cabinet ministers. Trevor Sargent becomes Minister for the Environment, with his colleague John Gormley a new Minister for State with responsibility for development aid.

Within six months of the new government the Trioka withdrew and Ireland came out of the IMF programme. Despite engaging in austerity light the new government was soon enjoying similar unpopularity levels as its predecessor. The Local and European elections of 2014 were not kind to any of the government parties.

By 2015 talk of a new political party being established and being successful was reaching a crescendo. The government’s main hopes to regain public support were for the country’s rugby team to win the World Cup, and for a new national spirit being found during the centenary 1916 celebrations…