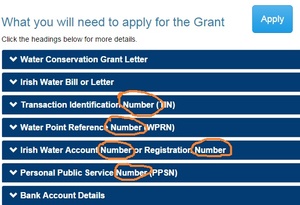 I received notification today from the Department of Social Protection concerning the application for €100 water conservation grant. The only option provided was to claim (or not claim!) the grant for which I had registered.

Why did the Minister and relevant department not use this opportunity simply to allow claimants to authorise the assignment of this payment to Irish Water as a credit against preset or future bills rather than have to go to the bother of claiming it and then having to go to the further trouble of paying the bill?

It would have been so easy to offer the choice of a simple assignment, would have facilitated very many people, would have encouraged payment and been of considerable benefit to cash flow for Irish Water, given that most bills are far less than the amount of the said grant!

Irish Water and the Department of the Environment seem determined to seize every single opportunity to indulge in additional administration, with all the attendant costs. It seems that common sense is still not at all common where Irish Water is concerned!
E Dillon,
Farranshone,
Limerick.

Previously: I Am Not A Number

The simple answer to this person’s question is the Eurostat test. In order to pretend that Irish Water was a private company it could only have a specific level of funding from central government and the rest it would achieve via billing and loans.
If the conservation grant was paid directly from the government to Irish water it would be obvious that this was funding coming from the government, so in order to avoid this it became a grant to the home owner. Now you must claim it and then use it to either pay the bill or whatever you wanted, but this added level of costly administration was a “chinese wall” to make the funding of Irish water less transparent to the Eurostat test.
In the longer term its no doubt that the grant will “dry up”, and the cost of running the grant system could be seen as a short term cost to government.

Offering Help To A Blind Person

‘All Form, No Function’