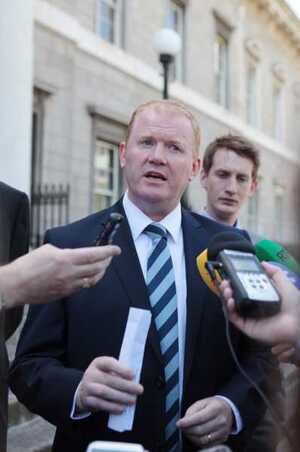 This morning, Fianna Fáil’s Barry Cowen claimed that, according to local authority figures obtained under the Freedom of Information Act, the number of people on the social housing waiting list is 130,000 – 45 per cent higher than that of the Government’s official figure of 90,000.

Cathal MacCoille: “We knew there were about 90,000 families and individuals on the social housing list, according to the Government’s own figures but Fianna Fáil say the figures they’ve obtained from the local authorities, under the Freedom of Information Act, show the true up-to-date figures for the number on that list is 130,000. We heard from Barry Cowen, of Fianna Fáil, earlier about this. On the line now is Paudie Coffey, the minister of state with responsibility for housing. Minister, good morning.”

MacCoille: “Do you agree, first of all, with Fianna Fáil’s figures. Are they correct?”

Coffey: “I don’t agree with Fianna Fáil’s figures because really, essentially, what they are is just a snapshot in time, taken from the local authorities around the country. But, as we have discovered, and really, the reason we utilise the Housing Agency – which is an independent agency – that has research capabilities to capture reliable information. We utilise those figures and they’re the figures that the CSO and every other agency in the country utilises. The last time that they did an in-depth analysis and a robust assessment of the housing need in this country was in 2013. And they’re the figures that we have arrived at – the 90,000 that you’ve mentioned and we utilise that in our response to the social housing strategies that the Government announced last year.”

MacCoille: “Right. The only problem with that is obviously that’s a two-year-old figure. What’s wrong with those figures that Fianna Fáil are using to say, it’s not 90,000, it’s 130,000.”

Coffey: “Well the housing lists are changing all the time, Cathal. If Fianna Fáil were to ask the same question today as it did possibly a month or a few weeks ago, they would get a very different answer.”

MacCoille: “Yeah but ok. But what’s wrong with them asking, as a measure, as an accurate measure – if they are accurate – of what the situation was a month or two ago, when they put in these requests. Why is that figure not accurate?”

Coffey: “Various factors come into play and as I’ve said, the Housing Agency do a  robust analysis, they engage with every local authority who, in turn, do a critical assessment of every applicant on the housing list. And that means a contact with every person who’s circumstances may have changed in the first instance. Some people may have found employment as we see the employment figures rising and they would no longer have the need for social housing. So that’s just one example.”

MacCoille: “Yeah but we’re talking about… what I’m asking is… because you appear to be saying that the local authorities are keeping inaccurate figures, is that what you’re saying?”

Coffey: “No that’s not what I’m saying…”

MacCoille: “So what are you saying?”

Coffey: “The figures are changing all the time and I think that’s acknowledged by all parties…”

MacCoille: “Yeah, ok, but can we just concentrate on the figures that Fianna Fáil got a month or two ago when they put in this request. Now, you’re not accepting those figures and what I’m asking you is: why don’t you accept those figures as a representation of what the situation was then?”

Coffey: “Yeah, a lot of those figures would have duplicity in them. A lot of those people will have left the housing list even since, there are changes in people’s circumstances all the time. Sometimes people’s housing needs would increase, and sometimes it would be removed altogether, where people come off the list.”

Coffey: “Now it is reasonable to assume that it has risen since 2013, I will acknowledge that and that is why every year, from now on we will have reliable information captured by the Housing Agency which are the independent agency in this regard and that information will be used to inform Government policy, not only in terms of the social housing strategy but in other strategies and policies in terms of planning and the provision of housing…”

MacCoille: “And when will we get those figures?”

MacCoille: “Sorry and when will we get those figures?”

Coffey: “The social housing strategy has now been adopted and it’s being implemented to meet the needs of 110,000 houses in this country, not the 90,000, 110,000. Every year, from  2016, we will have reliable information, we will evaluate that and monitor progress in terms of how we’re meeting…”

MacCoille: “So we’ll get an up-to-date figure next year?”

Coffey: “An up-to-date that is reliable and accurate and provided by the Housing Agency.”

MacCoille: “Any chance we’ll get it before the election?”

MacCoille: “Any chance we’ll get that up-to-date figure before the next general election?”

Coffey: “The Housing Agency only this year published the national housing survey and now they are already engaging with local authority housing which measure the needs over the coming years.”

MacCoille: “But what I’m asking you is: Is there any chance of getting an up-to-date figure for the number of people on the social housing list before the general election...”

Coffey: “Neither I nor you know the date of the next general election so I can’t answer that.”

MacCoille: “We do…excuse me Minister, please, can we just concentrate on the basics, we know there will have to be a general election by April of next year and I’m asking you a simple question: is there any chance of getting an up-to-date figure for the number of people on the social housing list before April next year?”

Coffey: “The Housing Agency will provide accurate data in 2016. I cannot give you that answer now, you know, over the airwaves. 2016 is set for a date for the general election. The Housing Agency are constantly reviewing and evaluating the housing need. The Government are focused on providing solutions to meet that need and that’s why we’ve committed €4billion over the next number of years to meet that need in social housing…” 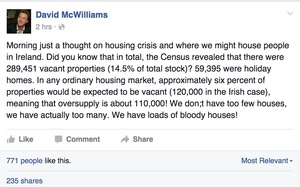