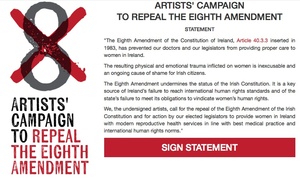 A new campaign launched today involving all manner o artists, actors, poets and whatnot hoping a repeal of the eight amendment will become a central talking point in the run up to the next General Election.

Artists’ Campaign To Repeal The Eight

95 thoughts on “The Hateful Eight”