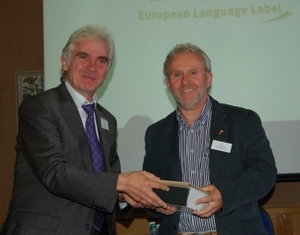 From left: Dr Tom Collins, chair of the Dublin Institute of Technology, and Dr Manfred Schewe, from University College Cork

A new Public Water Forum has been established under the Water Services Act 2013, chaired by Dr Tom Collins, of DIT.

The forum – through the Commission for Energy Regulation – is now recruiting 32 members, 20 of whom will be selected from the public, both Irish Water customers and those who don’t wish to register with Irish Water.

The Irish Independent is reporting that the members won’t be paid and that Dr Collins has waived a proposed fee of  €10,000 per year.

The forum is expected to meet between four and six times a year.

Dr Collins spoke to Rachael English on RTÉ One’s Morning Ireland this morning about what the forum is and what it can and cannot do.

Rachael English: “Members are being sought for a forum, to monitor the activities of one of the country’s most beleaguered companies, Irish Water. The public water forum will advise the Minister for the Environment, Irish Water and the Commission for Energy Regulation, on issues affecting consumers. Dr Tom Collins will chair the forum and he is here, good morning. What will this forum do and what sort of powers will it have?”

Dr Tom Collins:  “What it will do is it will provide a vehicle, a place and a process whereby people from different views regarding the management of water and assemble and share their views and arrive at a level of awareness, a level of consensus on all kinds of issues that are a priority and how they should be addressed. It’s power will be the power that’s usually associated with any watchdog. It will have both, in a sense, biting powers and barking powers. The bite will arrive from a memorandum of understanding which people will sign both with Irish Water and the Commission for Energy Regulation which will codify how we expect those two bodies to react to our proposals and our submissions. And the bark, of course, will require both bodies to explain to the public, if they choose not to accept our submissions.”

English: “But you won’t have any formal powers as such. You won’t be able to compel Irish Water to do anything. Or will you?”

English: “So how do you go about then ensuring that your advice is taken on board,  that you don’t just become a talking shop?”

Collins: “We will publish any reports as standard, we will  specify and codify what the specifics or our proposals and submissions were and we will audit the extent to which the submissions were accepted or rejected as the case may be.”

English: “Will the forum have any role in deciding pricing or will this just be about water quality and the like?”

Collins: “No, pricing I think will be the dominant issue at, certainly, the early stage. It is clearly the issue that preoccupies I would say the public mind at the moment. So it will certainly focus on it. But my expectation, and of course I don’t want to preempt the work of the forum – my job is to facilitate the issues – my expectation is that it will focus, once the price issue is resolved and however way that happens, on issues to do with quality with public health, with the level of service, on investment priorities and I also think on issues like conservation, water is a finite, scarce and vulnerable source and we are probably the only species, as humans, we can destroy it not just for ourselves but for the wider eco system.”

14 thoughts on “The Watchdog Paddle”