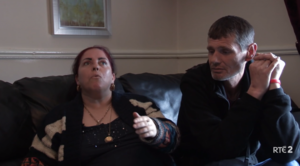 More than 130 babies are born addicted to methadone or heroin in Ireland every year. This documentary explores this issue from all angles: expectant mothers who are on methadone, doctors treating the new-borns and some of the children – now adults – themselves.

People like Jennifer Byrne, a mother-of-six who has had five children while on heroin and/or methadone, and is expecting again and Petrina Williams who, after having been addicted to heroin as a teenager, is hoping the baby she’s expecting won’t suffer from withdrawal as a result of a decade of methadone use.

The documentary also features the stories of Donna Tyrrell who was surrounded by a variety of drugs as soon as she was born and carried that burden with her until after the birth of her own daughter; and Gary Locke whose life was thrown into chaos from birth as his mum was caught up in the first wave of heroin abuse.

Finally, Lisa Carroll speaks movingly about how the loss of five children, as well as suffering four miscarriages, has been devastating but she and her partner Thomas Cullen have not given up on the dream of one day becoming parents.

70 thoughts on “Staying In Tonight?”