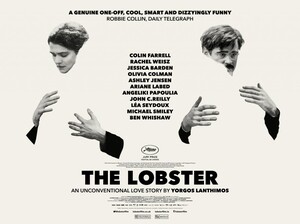 Those familiar with the work of Yorgos Lanthimos, pioneer of the Greek weird wave, are unlikely to be fooled by the current marketing campaign suggesting that The Lobster is a black comedy.. The Lobster is a hard sell. Lanthimos presents an absurdist vision of reality where nameless singletons are forced to find a mate within forty five days, after which they are transformed into an animal of their choosing. It’s impossible to describe without using the term, Kafkaesque. But anyone expecting a version of Logan’s Run (1976) with jokes is likely to be either disappointed or mildly traumatised
At its best, The Lobster is a warped mirror held up to the banality of existence. It reflects the universal truths that we all suspect but don’t say out loud; single people are looked down on, everything is easier for couples, and children are often used as a temporary solution to irreconcilable problems. At its worst it’s a gruelling exercise in endurance, offering a thought-provoking but fairly grim vision with moments of extreme violence. Its value lies in the discussions it will provoke rather than as a source of escapism. Much respect to Colin Farrell for choosing the road less travelled. If he keeps this up, the rest of his career will be extraordinary. 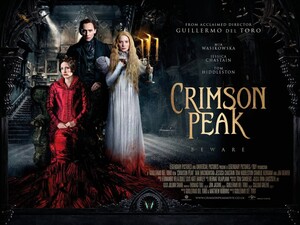 At the end of the 19th Century, penniless toff Thomas Sharpe (Tom Hiddleston) woos wealthy heir Edith Cushing (Mia Wasikowska) away from her affluent New Jersey home and whisks her off to his crumbling Cumbrian estate. Crimson Peak is the sort of gaff that an estate agent would describe as a “desirable fixer-upper,” and would appear to be the most haunted house in England (ghosts in the bath, ghosts in the attic, ghosts in the porridge etc.). But far more terrifying than the mansion’s supernatural occupants is Edith’s new sister-in-law, Lucille (Jessica Chastain). Oh, she’s a bad ‘un and no mistake.
Although the premise and setting of Crimson Peak is archetypally gothic, del Toro’s execution is pure melodrama. Surprisingly, there are precious few scares, and the gore is of a distinctly cartoon variety. Much like Tim Burton’s recent output, it looks beautiful but there’s nothing hidden under the surface. Hiddleston hams it up with relish, but the normally dependable Chastain is burdened with a British accent that really hurts. There are precious few alarms and no surprises in this competent but predictable homage to mid-period Hammer horror. Ultimately, it’s a bit of a let-down. 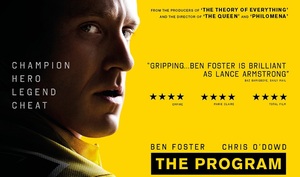 This dramatisation of David Walsh’s exposé of the Lance Armstrong doping scandal is heavy on Armstrong (Ben Foster) and surprisingly light on Walsh’s (Chris O’Dowd) side of the story. Given the amount of documentaries already dealing with this subject, it seems like a missed opportunity. If there is any distance left in this story then focussing yet again on Armstrong isn’t the answer. Stephen Frears’ movie might have worked better if it dealt with Walsh’s experience, or examined how Armstrong’s competitors felt about being consistently beaten by a cheat. As it stands, The Program is a run-of-the-mill biopic full of trite, “C’mon Johnny, I’m Jonesing real bad and I know you got the stuff” style dialogue and leaving the impression that Armstrong and his team were ploughing up the Alps high-fiving each other with syringes sticking out of their arses. The Program is a passible TV movie, but it’s hardly worth a trip to the cinema. 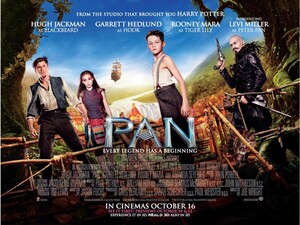 What the hell is with Hugh Jackman and the endless showtunes? At any given moment, the man is no more than a pair of jazz hands away from donning a top hat, getting down on one knee and bursting into “Surrey with the Fringe on Top.” In this slightly steampunk reimagining of the prehistory of J.M. Barrie’s Peter Pan, Nirvana and The Ramones get Luhrmanised. “No Fun” by The Stooges would have been more appropriate, because this is just dreadful. In fairness, the art direction and set design are impressive, but there’s a distinct fug of apathy hanging over every other aspect of Pan, from the script and performances to the big set-pieces. Even the most forgiving child is likely to be bored rigid by this bloated, overlong mess. It’s hard to fathom that this is the same Joe Wright who directed Pride and Prejudice (2005) and Atonement (2007). Jackman must be positively stuffed after chewing so much scenery. Utter Pan-ts.

Also on release from Friday 16th October: TALKING TO MY FATHER; HOTEL TRANSYLVANIA 2.