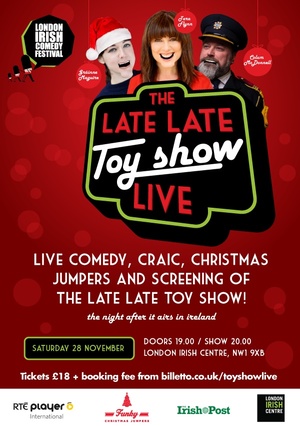 I’m organising an event in London called The Late Late Toy Show LIVE! on Saturday 28 November in the London Irish Centre [Camden Square, London NW1], which is a screening of The Late Late Toy Show (with support from RTÉ Player International) the night after it airs in Ireland. There’ll be live comedy, craic and Christmas jumpers! Comedians Tara Flynn, Gráinne Maguire and Colum McDonnell will host. Be very grateful for a shout out to let your Irish readers in London know about it.

Verona Mullen: What Happened Next

34 thoughts on “Homesick In London?”